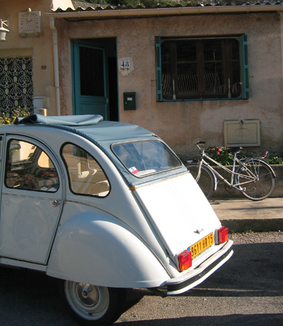 Yesterday we drove to the centre-ville* to buy the children's lunch tickets (a.k.a. les tickets de cantine). The little lime green squares of paper with "Cantine Scolaire Municipale" printed on one side are for sale at the Town Hall, a building sandwiched in between La Poste and la boucherie.*

Motoring into town, we made a left past the old iron kiosque à musique* and turned into the narrow and crowded parking lot.

After a few trips around the parking lot, I found a half-space next to l'Office du Tourisme. My car is short and compact and easily fits into even the most étroit* of spaces. I pulled in to the familiar spot (which is usually empty due to its impossible size) and, comme d'habitude,* ran right into le réverbère* which, by the way, is a funny name for a lamppost.

Max got out of the car and ran up to the post to inspect for damage.
"Don't stand there like that Max, the police will come over!"

Not that I was hiding from les flics,* I knew I hadn't done any damage. (I've hit that pole on two previous occasions, so far not a scratch!)

My 9-year-old stood there, nose to the fender. "Max, hurry up, quit being so conspicuous!"

I looked left, then right. Nobody seemed to have noticed the bump. Looking left again, I saw the grand-mère sitting on the bench in front of the Office de Tourism. I froze before the would-be rapporteuse.*

We studied each other in silence until the thin straight line of her mouth turned up. With that she simply nodded her head. Not far from her, a chipped blue 2CV,* bien cabossé, was parked under an old Platane* tree. I imagined she had her own run-in with the lamppost at some point or another. And you might say we were now soeurs, or sisters in crime.