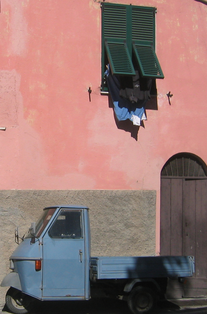 Contrefaçon comes from the verb "contrefaire" which means to imitate,
to falsify, to mimic, to disguise, to infringe, to feign or to distort

Politeness in itself is only an ingenious disguise of goodness.
--Alexandre Vinet

The drive from our medieval village in France to the seaport town of Ventimiglia, Italy takes only an hour and a half. It is a breathtaking ride most of the way, with the glimmering Mediterranean sea below and, east of Nice, hills peppered with villas; the colorful facades showing a charming patina from age and the salty sea breeze.

In Ventimiglia there is a jewellery shop on every street, and perhaps as many liquor stores. Shop windows are bursting with bottles of Ricard,* Italian grappa and a variety of alcohol. For those who like l'or* Ventimiglia has gold à gogo.* Perhaps the idea is to put a little wind in your companion's sails (or "mettre du vent dans ses voiles" = to get him a little tipsy) before venturing in to purchase that ring or collier.*

On many a street corner you'll see a man dressed in a boubou,* Louis Vuitton handbags dangling from each arm and more monogrammed purses bursting from a duffle bag... all knock-offs. Though Ventimiglia is known for its smoking deals on jewelry and alcohol (due to a lower liquor and jewellery tax) and for having one of the largest outdoor markets in Italy, it also seems to be the capital of...

"Contrefaçon," my husband says.
"What is contrefaçon?"
"You know, fakes."

"Si, si," says Sonia. "But if you want a Louis Vuitton, one that even the boutique sales people can't tell is faux, see Fernando next to the fish stall, just past the flowers. He has the season's new collection before the real line hits the shops! You cannot tell the difference!"

We are not in Ventimiglia for LV purses, alcohol or flowers, but to celebrate our 10 year wedding anniversary. The Italian Riviera is a good choice for its proximity to chez nous,* for its gastronomy, for its seaside allure and for an exotic change of scenery. (Exotic because we can't speak Italian and such foreignness has a way of throwing a warm pink hue on everything.)

"Ventimiglia is known for la joaillerie* and alcohol," Sonia confirms, "But also for its beauty!" she says, waving her arm out to the turquoise blue Ligurian sea.

We are seated on the terrace at the most eclectic lodge I have ever stayed in. Jean-Marc found the secluded B&B via an internet search and made reservations illico.* The former convent is practically perched over the sea and overrun by purple vine flowers, fig trees, lavender, blackberries and bamboo. To access the funky B&B we are obliged to park at the end of a gravel path, before heading down a steep stairway leading to the villa.

The stairs inside the house are severely sloped from 800 years of being tread upon and are now painted black. The white hallway walls are full of black and white photos of Hollywood stars. In our room's library, I find an odd assortment of books including a thick volume of the collected stories of Jane Austin, a book titled "Psychopathia Sexualis" and a "Dictionary of Marine Insurance Terms".

The next day Sonia makes us breakfast: un petit déjeuner as eclectic as the convent itself. We begin with dessert: crème caramel and a peach yogurt. Next, there is a tray of cantaloupe and Italian ham. After that we have a deep fried omelette with sliced hot dog followed by an apple cake. Finally she brings out a plate of fruit which resembles Lychee but smells like a rose. "From my garden," she says.

I notice Jean-Marc isn't eating the hot dog omelette or the apple cake and I end up eating it all so as not to vex our hostess. On I went, feigning, or one might say "en contrefaisant la faim."*