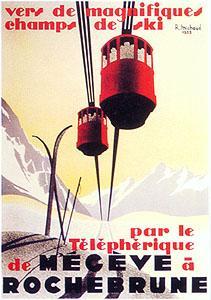 Expressions:
avoir avalé le pépin = to have swallowed the seed (to be pregnant)
avoir un /des pépin(s) = to have a problem(s)

What do the French like to do after a day of intensive winter games? Write thoughtful poems, évidemment!*

The five teams (organized according to which lodge the participants were camped in) left Serre Chevalier for Briançon and climbed aboard le téléphérique,* destination: a formidable mountain chalet, une étoile* in the night.

"It is a nice restaurant," the cable car operator mentioned, as we stepped from platform to the suspended cars, which did not halt, but continued to inch forward and upward, disappearing into the black sky.

"Have a lot of people gone up tonight?" I asked.
"No, just three cable cars are leaving now."

As the doors closed I heard him mumble something about the wind, and how the lift had been shut down earlier for safety...

Crammed into le téléphérique like veritable sardines from Marseilles, I switched my mind -- still obsessing about a tumbling cable car -- to the French, now bien parfumés* and coiffés* after the races they'd participated in earlier that day. The French women, who would spend the weekend sans maquillage* by day, hair tied back à la queue de cheval,* now had glossed lips, penciled eyebrows, mascara and fluffy locks. If they were pretty before, now they were traffic-stopping canon* in their fashionable pointed-toe boots and high heels. Jean-Marc had cautioned me not to wear les talons,* due to the ice and snow, and so the French women now towered above me, a reminder to never follow a fashion tip from my husband--be he French!--ever again.

The food was good at the restaurant and, incredibly, pas très chère* considering the lieu.* For a 35 euro forfait,* the three-course meal included an apéritif before the repas,* wine à gogo* during, and coffee après.* (The nail-biting cable car ride was also included.)

After une bonne Tartiflette* and a blueberry tart, the 5 tables were assigned words and asked to compose a poem. Le pépin* was that the words were--comment dire?*-- not very poétique.  Here are a few that I can mention:

The other words were related to anatomy and served to colorier* the spontaneous prose. I might have mentioned them to you here, if they weren't so--seedy--or, like my favorite grapes, if they were sans pépin.*