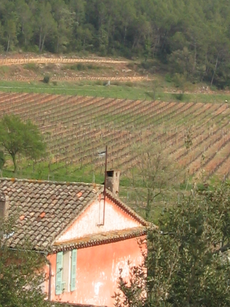 Earthworms bury themselves in the ground so as not to fall in love with the stars. --Yvan Audouard

These last few years have seen the appearance of a number of vineyards known as "New World". We often think that they produce uniform industrial wines, but should we systematically oppose wines of the "New World" to those of our "Old Europe"?

In fact, there are many similarities between these wines. Beginning with the grape varieties used, which are issued from the best clones. Also, methods of wine making are more and more uniform and, notably, the same winemakers are making the wines. [Because they travel from one area to another, they are known as "oenologues volants" or "flying winemakers". They make wines in the autumn in the Northern Hemisphere and then travel to the Southern Hemisphere in the spring].

In the 19th century, the English went to Australia to cultivate the vines. In South Africa and in Argentina, wine making is equally ancestral and doesn't therefore have any new character.

In Europe, above all it is the "terroir" (unique local soil and tradition) that dominates. This idea of "appellation contrôlée" (in which a label assures the origins of a wine) guarantees an authenticity that permits the soil to express all of its potential. This is the result of centuries of accumulated know-how where we have realized which grape variety adapts itself best to which climate and
soil. This notion of soil associates itself as well to the concept "Chateau," and the idea that vines belong to the same vineyard and are passed on from generation to generation. Because of this, a traditional vineyard will often have a lot of old vines which, due to their age, will have developed a profound root system permitting auto-sufficiency in water and food. These roots descend into the far reaches of the soil to take in all of its complexity;  these old vines produce unique grapes, and therefore exceptional wines. On the other hand, the yield is low, but, as the vines have been passed down from the family, there is no quantitive production necessity, in regards to matters of financing. These qualificative aspects are not exclusive to "Old Europe". Proof that two different worlds do not exist in these matters: certain wine-makers in Oregon have created the DRC (Deep Root Coalition) to prohibit irrigation in the Willamette Valley and in reference to Domaine de la Romanée Conti where the vines are often over one hundred years old.

The difference, therefore, is situated upon this point, rather than upon the geographical origin of the vineyard.

Examples include: Merlot, planted in the center of Napa Valley, where there is no justification for planting such grape vines (considering the soil in that region -- where automatic watering prevents the vines from taking root, and where there are astronomical yields), and Chardonnay planted in the Languedoc (where continental climate, necessary for this grape variety, is inexistent). Most of the time grape varieties planted in such areas produce uniform wines and must respond, above all, to productivity norms driven by investors who have nothing to do with passion and quality.

Thus, to characterize these industrial wines, instead of saying "wines of the New World," I'd say: "New wines of the world."

Jean-Marc Espinasse is a French wine lover. Apart from managing, along with his uncle, a little family vineyard in Châteauneuf-du-Pape, he is selecting "soulful wines" throughout France, Spain and Italy to offer to US wine importers. He is also educating people in wine, mainly in corporate companies but also in schools like the Wine MBA program in Bordeaux.

Families of the Vine : Seasons Among the Winemakers of Southwest France "Sanders’s book brings contemporary winemaking in France to life....Absorbing and informative." --Library Journal