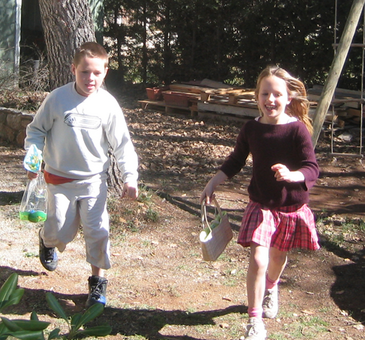 I search the kitchen for récipients.* I pull a salad bowl from the cabinet--trop gros;* I take a soup bowl from the armoire*--pas assez profond.* I settle on an old wine glass, a jam and mustard jar, a see-through coffee cup and a tumbler.

Jackie runs up to me wearing a frilly dress with a black velvet haut* and a white chiffon bas.*
"You'll need to change if you want to help out!"
"D'accord!"* she says, spontaneously obedient.

I measure out ten tablespoons of balsamic vinegar, annoyed when I can't find the 79 cent bottle of clear stuff.

Jackie returns, her brother in tow. They are both wearing their pajamas. Max tosses the orange and blue tablets--one in the wine glass and one in the jam jar. Jackie plops the yellow and red tablets into the coffee cup and mustard jar. Three sets of eyes dart to the remaining green tablet. "That one's mine!" I say, swooping it up and dropping the pill-sized disk into the tumbler.

We watch the tablets fizz. The colorful, effervescent display livens up our vieillotte* cuisine.

Next, we take turns emptying one-half cup of eau du robinet* into each glass. "O.K.--stir!" I say, and the kids each take a fork and scramble the water until the tablets are completely dissolved.

I have waited until the eleventh hour before beginning The Project. I estimate we are about one-third of the way through.

"Allez!" I say, bending the wire egg dropper (one egg dropper--two kids! Who put this egg-coloring kit together anyway?) and handing it to Max. Jackie and I watch, with bated breath, as Max lowers the cooked, brown-shelled eggs into the dye.
"Careful!" I say.
When Max reaches for a third egg, Jackie has a fit.
"O.K. Now it's Jackie's turn! Doucement, Jackie...*"

Time to laisse tremper* the eggs for thirty minutes. (Last year we followed the package's instructions for "three minutes" and the brown-shelled eggs surfaced without color).

"There's still the painting to do," I think, staring at the tray of (messy) metallic colors.

Jean-Marc pops into the kitchen: "It's so nice what you do," he says, as if I have had this kind of patience from the get-go. I look down, lashes fluttering, and my cheeks turn the color of the oeuf rouge.*

The French word "tremper" is referenced in these books: