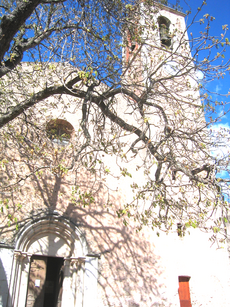 le béguin (bay-gehn) noun, masculine
1. (from "embéguiner," to put something in the head) a passing fancy
2. (from béguine) = hood (of beguin nun); bonnet (baby); cap

In French, the expression "avoir le béguin pour quelqu'un" means "to have a crush on somebody".

My husband is on his way home from a two-week tournée* in the States and I've gone and found myself smitten by another foreigner: someone two-and-a-half times my age.

We enter clusters of parasol pines, driving through a forest of gigantic broccoli. The earth's tint in this part of le Var* is somewhere between sienna and brick-red, the color of my native Arizona, of the Grand Canyon or Sedona. In the distance, the seaside towns of Fréjus and St. Raphaël, beyond: the dark blue liquid horizon.

My friend Michèle has invited us to her home in Bagnols-en-Forêt to meet a woman who has lived through two world wars. The-one-I-will-soon-be-smitten-by almost didn't make it to lunch, preferring to stay home and supervise the workman who were busy scrubbing her tiled terrace with white vinegar. The workmen are fond of her as well. She says it's due to the beer she gives them at the end of the work day; it doesn't occur to her that it might be her charm that has the men on all fours, knees soaked in vinegar, scouring past six. When she's out of beer, she knocks on the neighbor's door, a spry Frenchman at 72 ans* (eighteen years her junior) who wears a black toupee and has a handle-bar mustache; he gives her the beers to give to the fragrant workmen.

I study her from beneath the flowering cherry-tree, its full white blossoms muffle the rumbling of one thousand nectar-hungry bees. Looking up through the trees, to the sky she says:
"It is not le Mistral when the clouds are out. When the Mistral wind blows through, there is not a cloud in sight."

I am not interested in clouds or le Mistral, not anymore, and I pull my chair closer to hers.
"What brought you to France?" I say.
She tells me that when her husband died twelve years ago (here, I pause to calculate: when she was 78...) she decided to go west, to the South of France, and build a summer nest.

As she speaks, I can't help but admire her the structure of her face: rectangular; it is the best of oval, the best of square. Her eyes are that pretty shade between "steel" and "powder": robin's-egg blue. Her short hair is that quality of white that tips the edges of the blue sea, and it falls back off her face in thick, endless waves.

As she sat there, relaxed yet upright, now talking about her 35-year-old grand-daughter (an art teacher in Texas) I tried to pinpoint just what part of Angleterre* had rubbed off on her voice.

I noticed her earrings: large pearl-colored disks, and I made a note to wear such earrings in 53 years, as if les boucles d'oreille* would render me as beautiful as she.

She tells me that her sixty-three-year-old daughter has a butterfly tattoo on her hand.
"She got it thirty years ago."
"Were you upset?"
"No. But I told her the butterfly might look a little different when her skin begins to wrinkle."
"Does it?"
"It looks quite nice, actually."

My eyes left hers and I stared down at my own smooth hands in silence. I wanted to tell her that she is like that butterfly.