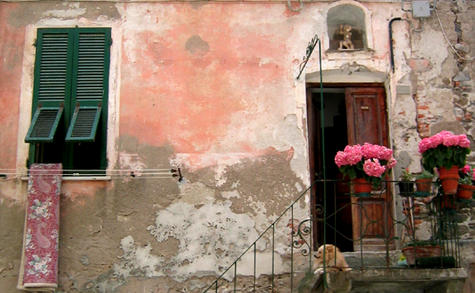 Read about this photo at Photo du Jour, below

Max celebrated his tenth birthday again (this time with "les copains"*) on Wednesday. For this party there was no need to arrange a dozen movable chairs into an oblong shape or to prepare the boom box, no rush to find twelve potato sacks for the races, no need to attach a bag full of bonbons* to a tree branch, or to prepare a cloth blindfold and worry about sightless kids swinging bats. Jean-Marc had organized a soccer tournament instead.

In fact, Jean-Marc was in charge of this year's party: shopping for it, setting it up and animating it. As he unloaded the groceries, I discovered the 'birthday cake.'
"C'est tout? Is this all?"

The strawberry pie was midsized between a fast-food pancake and a frozen pizza. Jean-Marc gave me his usual reply:
"Il y aura assez pour un régiment--There'll be enough for an army."
I looked at the box which read "8 portions" and swiftly pointed that out to Sergeant Cake.

Jean-Marc remained calm, continuing to unpack bonbons, fizzy drinks and candles. When his feathers didn't ruffle, I said:
"Okay. You are in charge of cutting the 'cake'!"

I had turned the whole fête* organization over to my husband as I tend to get really worked up and worried about all of the details. Besides, I reasoned, the party was pour les mecs* (Max didn't invite any girls).

An hour into the festivities I kept noticing how relaxed everyone was and how piece-of-cake-like the whole thing was unfolding. At the refreshment stand where small tubs of candy overflowed and plates were laid out across the table--with sliced-pie for all--I wondered when I would shed my consumeristic coat and send "the Joneses" packing once and for all. By then, I'll have truly comprehended that bigger cakes, more pop, more balloons--toujours plus!*--do not make for a more secure existence; and we all know that a kid would rather have attention than a bigger slice of pie.

I watched Jean-Marc out there on the turf running alongside the sweaty pint-sized soccer players. "Allez! Allez! Allez!--Let's go!" he cheered. He had prepared medals for the winning teams and was looking forward to the post-match award ceremony.

If a delivery van from the House of Pies had stopped by yesterday afternoon, those boys would have continued to whoop, holler and kick up the French dirt out there on the makeshift soccer field, shoveling good times and a little less cake into their memory banks.

Photo du Jour:
"A Dog's Life, not far from Nice." I'd be "omitting" if I led you to believe this image was snapped in France. It was taken a few years back in a quiet Italian village--the name of which escapes me...