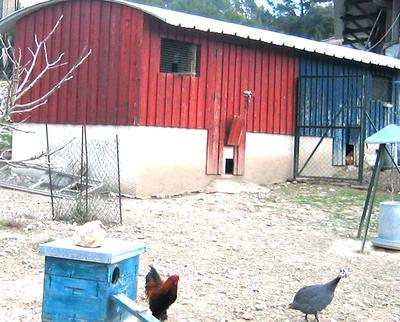 Read about this photo at Photo du Jour, below

Expressions:
coude à coude = side by side ("elbow to elbow")
lever le coude = to booze ("to raise the elbow")
un coup de coude = a nudge, a poke of the elbow
jouer des coudes = to elbow one's way (through a room...)
se serrer les coudes = to stick together, to help one another
se fourrer le doigt dans l'oeil  jusqu'au coude = "to drive the finger into the eye right through to the elbow" (to be totally wrong)

Citation du Jour
Une vie usée aux coudes  / A life worn to the elbows
l'amour la retourne  / Love brings it back
et elle peut encore servir. / and it can again be of use.
--René Laporte
........................................
A Day in a French Life...
Not far from a forest of pins parasols,* before which a leafy floor of vines covers the earth like a live green carpet, we sat--twelve to the table--beneath le soleil varois.* A few of the women flipped through photos of Manou's bastide,* observing its before and after transformation.

When we came to the snapshot of the crumbling cabanon* (just off Manou's kitchen, across the gravel driveway) our hostess explained that she and her sister had spent an entire day pulling off the rampant lierre* from what was left of the shed's roof.

Our maîtresse de maison* began the renovation of her farmhouse while pregnant with her second enfant.* That child, a daughter, is now three years old and the house has developed right along with her.

Inside the three-story bastide (in the salon*), Manou's husband had knocked down a cloison* and brought in a giant stone fireplace. The couple got an excellent deal on la cheminée* after its previous owner painted the 19th century relic bubblegum pink. Though Manou and her husband painstakingly removed the rosy coat, a hint of its former party dress (an ever-so-faint blush) remains at the foot of the fireplace.

Returning to our seats, we resumed lunch. Salads, barbecued brochettes and carafes of chilled rosé lined the table's center. Earlier, we had decided to put all the food on the table, but that did not stop the hostess from getting tangled in a revolving door to the kitchen, as she tended to her guests.

While Manou's bastide is on an expansive plot of farmland, it is still part of a tiny Provençal hamlet. A few other stone buildings exist across the gravel path, just behind an old well. Midway through lunch, the woman next-door stomped down the stairs and across the yard, flung open the doors of her bagnole* and blasted the car radio: road rage à la Française.

"What she doesn't realize," Manou said, referring to the ongoing feud (in which the neighbor-in-question had squatted most of the remaining hamlet, part of which belongs to Manou), "is that I love music!"
We went back to viewing the before and after photos while some of the women hummed along to the tunes blaring from the neighbor's trembling jalopy.

Later on, when our fête* neared its end, and the neighbor had thrown her arms skyward before disappearing into her house, I told our hostess that she had a lot of courage to undertake the renovation.

Manou raised her arm, pushed down her sleeve and pointed to her elbow.
"I don't know about courage... but l'huile de coude--elbow grease--oui!"*

Photo du Jour:
This image was taken several weeks back in Tarradeau, at a splendid honey and cheese farm.