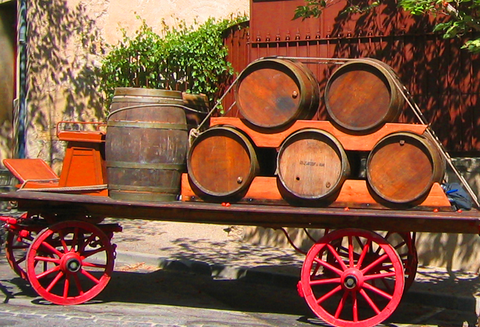 In the historic town of St. Maximin, where visitors from all over the world come to see the relics of Mary Magdalene (behind thick glass in the town's basilica) I prepare for a short périple.* The tree-lined parking lot in front of our centuries-old village home is complet,* all 14 parking spaces have been claimed. I am about to make one Frenchman's day by liberating une place*--just as soon as I can wrestle my one- and three-year-olds into their car seats.

While I attach Jackie's seatbelt, Max hums, pulls at my hair, or points to the pigeons in the dilapidated square. Beneath the campanile--which hasn't rung in the hour in years--Madame Cagnasso is scattering baguette crumbs again; if she keeps this up, there'll be more birds here than beret-toting Frenchmen. Maybe that's her plan. I look up to see Monsieur Alag, my other neighbor, shaking his head in response, "Elle est complètement dingue. She's absolutely nuts." Monsieur looks as old as Mary Magdalene, perched there on the curb in front of les pompes funèbres.* He hates it when Madame feeds the pigeons. "C'est sale!"* he says, pointing to the crotte-lined* curb. I sidestep the pigeon droppings on my way around the car to buckle in a three-year-old Max, "Mommy's going to put YOUR ceinture* on now," I say.

Max stops humming and releases another lock of my hair. His eyes leave the pigeons and refocus on my still-pursed lips. Next, a little voice replies, "SEN-tewr, maman."

I pause for a moment, signal "un instant" to the impatient driver who is still waiting for our spot, and repeat "SEN-tewr," making a mental note to say SEN (like century) from now on and not SAHN (like sonnet).

With that, the bilingual boy resumed his humming, the maman put the car in reverse, the pigeons plastered the village floor, and the neighbors fussed or frowned over feathers in the little French village of St. Maximin.

Words in a French Life: "...a heart-winning collection from an American woman raising two very French children with her French husband in Provence, carrying on a lifelong love affair with the language."


Proverb:
Le mensonge ressemble à la ceinture : il n'attache que son propriétaire.
A lie is like a belt. It only secures its owner.