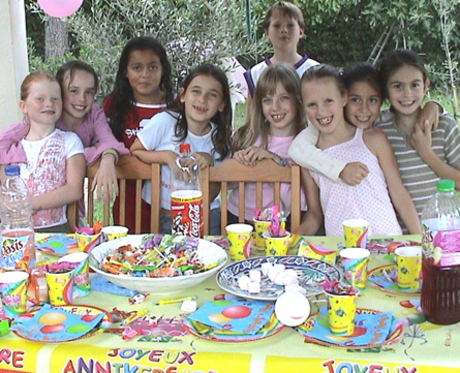 Jackie celebrated her huitième anniversaire* on Wednesday, three days after les faits.* This year, eight copines* showed up, cadeaux en main,* to shriek, swoop and slap their way through the afternoon fête. As for me, I shouted:

"Calmez-vous! Calm down!"
"Don't run with sucettes* in your mouth!"
"Don't slap each other!"

I stood in the front yard next to the waning lavender, hand on hip, free arm waving frantically as I shooed the girls out of the flower patch, "Sortez de là! Get out of there!"

"They are chipies,"* one of the moms said of the girls, pronouncing chipie, "sheepee." "But girls are easier," she added. I had been trying to decide if Max's birthday party (last May) was as rowdy, as decibel packed as today's. It didn't seem so.

Speaking of Max, the little "sheepees" had chased him into a corner, to where the two cypress hedges meet, and sealed off any exits with a sound wall of squeals. When the giglets tired of tormenting Max, they dashed off to play a game of Cache Cache.*

"Prêtes ou pas... j'arrive! Ready or not, here I come!" one of the eight-year-olds screamed. Waaaaaaahhhhhhhh!!!!!!!

Finally there came time to cut the cakes. My mother-in-law had baked two gateaux* for the party. She and I assumed we would have the chocolate cake to ourselves, so certain were we that the little girls would prefer the raspberry cake that Jackie had requested. All those bright red framboises* were tempting but when the call "Qui veut un morceau de gâteau? Who wants a piece of cake?" went out, one after the other, the little sheepees ran up and pointed to the chocolate cake.

At 5:29 p.m. I stood conspicuously in the driveway, beside the limp lavender, waiting for the parents to return. Meanwhile, inside, the sheepees sent hair-raising screams reverberating throughout the house. Eyeing the front gate, I concentrated on all the uneaten morsels of chocolate cake that I had carefully gathered from the abandoned paper plates. I thought about how it would soon be my turn to swoop up and slap down some of that moist buttery chocolate, and how I might even share my stash with la belle-mère*--if I could find her (she had run off earlier, hands-on-ears, fleeing the noise). Just the thought of the upcoming silence and the savory cake made me want to shriek.