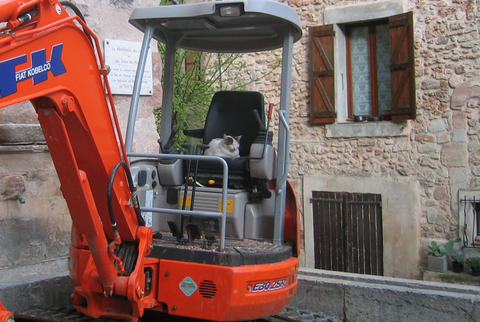 Five weeks left to purchase Volumes I-III! After several reprints, I will not be sending Words in a French Life: Volumes I-III back to l'imprimerie.* Don't miss these stories, in their complete form--order a set of books if you can.

If war is punishment from heaven, how many innocents have to pay for the guilty. --Pauline Viger-Bélanger

At 4:29 my car crept up the hill as I scoured the sidewalk for partners, partners in crime, that is. Before bottlenecking the road with the addition of one more illegally parked car, I calculated that the school bus had already passed (only smaller cars would be circulating at this point, I reasoned). Next, I rolled a front tire, then a back, onto the yellow marked curb outside the school, just behind the other law-breaking bagnols.* There is precious little parking in our village and parents must double as petty criminals each day à la sortie de l'école.*

On my way to the school gates I greeted another mom who had snatched a no-parking spot just in front of a garage, effectively blocking the exit while flattening a row of lauriers-roses.*

"Salut," she said. "Salut," I replied, in cahoots with the morally challenged maman.* Next, we strode up to the school gates following in the wake of the bell chime.

Max appeared from the crowd of French kids flanked by his favorite buddies and beaming, as usual.
"You didn't get another punition today, did you?" I said.
"Non, je me suis tenu à carreau aujourd'hui!* he assured.

Last night, as punishment for talking to the kid sitting beside him (Max insists he was just handing the kid an eraser), he was obliged to copy down all the "Règles de Vie" or "Life Rules" (recently handed out to students) including:

We headed for the car, Jackie trailing behind us with her cartable*-on-wheels.
"Moi, j'ai eu une punition,"* she sighed. For that, we learned, she would be writing ten lines of "Quand la cloche sonne on se met en rang." ("When the bell rings we line up.")

Jackie went on to tell me about how it wasn't her fault, which reminded me of what my grandfather used to say: If you're around trouble, you're in it!

We made it to our car and, noticing the paper-free windshield, I heaved a sigh of relief. No parking amende.* I looked up the sidewalk to the line of cars parked in the same fashion; I was surely around trouble, just not yet in it.

On the drive home I tried to imagine my punition, and what sort of ten-liner I'd have to copy down, should I be caught. Perhaps something like...

"I promise to leave the zone jaune* alone" or,
"Stay afar from the yellow troh-twar*" or,
"Park on a lark, and get a big red mark!"

It's easy to copy down lines, especially if you like to write. The hard part is learning the lesson. When would I learn mine?