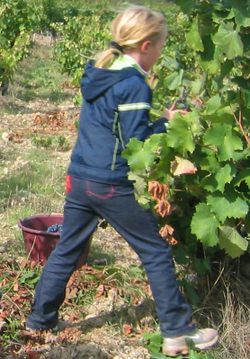 The Littlest Vendangeuse* (photo, left). My eight-year-old, Jackie, in Châteauneuf-du-Pape. Find a link to more photos from this year's harvest at the end of this letter.

We live surrounded by a sea of poverty. Nevertheless, this sea can decrease in size. Our work is only a drop in a bucket, but this drop is necessary. --Mother Teresa

On the eve of her eighth birthday, my daughter Jackie was crowned Reine des Vendanges, or Harvest Queen. Her small hands wrapped around pruning shears, she collected as many grapes as even the most seasoned vendangeur.*

We joined 20 grapepickers in Châteauneuf-du-Pape this past weekend, along with our friends Alicia and David, to help uncle Jean-Claude harvest four parcels of vines--including the famous treize cepages*--from which he produces 5-6 thousand bottles of his traditional Domaine du Banneret wine.

From the back of Jean-Claude's old blue fourgonnette* we gathered what supplies we would need to cut the sweet grapes. When the last sécateur* was snapped up by Jackie, I unhitched a seau* from the stack and followed her, empty bucket swinging alongside me.

When the Mistral picked up, we held fast to the feet of the vines. The chilly northwesterly vent* blew glasses and hats off the pickers and turned lightweight buckets on their sides, sending grapes flying.

Time and again, I looked up to find my daughter advancing quietly along the leafy rows, liberating grape from vine. Wild herbs, lettuce and asparagus pushed up in some areas and the scent of mint pervaded the air between certain rows of vines. My cousin Audrey and I stopped to pluck up and admire a bunch of spicy arugula or "roquette" as it is known here.

When grapes began to tumble from the buckets, the pickers yelled "SEAU!" to which another vendangeur would arrive to empty or replace the buckets.

A woman jogged by and a few of the men almost tripped over their collective seaux.
"She was blinded by the sun, otherwise she wouldn't have coucou'd* you!" one of the men explained to the other.

While Max kept busy picking grapes and emptying buckets, he also took refuge from time to time in our Citroën, parked alongside the vines. From the warmth and calm inside, he listened to the Skyrock radio station and snacked on chocolate bars.

I continued to follow in my daughter's tracks, awed by her stick-to-it-iveness. When someone found an extra pair of shears, I joined in, accomplishing most of the vendange seated on my heels, minding my back. Jackie advanced from one vine to the next, intermittently lugging her bucket and hunching over to free the grapes.

"Comment ça va? How's it going?" I asked the man working the row ahead of mine.
"Mal aux dos!" he replied. "But that's okay. Il faut poursuivre--we must carry on!" he added.

Perseverance... *That* is how the littlest picker became Harvest Queen on the eve of her huitième anniversaire* in the ancient papal town of Châteauneuf-du-Pape.

Photos:
See photos from this year's vendange:
http://a-la-recherche-du-vin.typepad.com/photos/harvest_2005/
*Merci to Jean-Marc for the photo compilation!