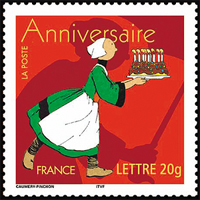 I set the packaged books down on the table-for-two, just opposite the wall of post office boxes. Next, I stood on my toes to peer into boîte numéro* 32. Unsure, I pushed the key into the keyhole.

There is no need to open one's box to check for courrier,* one can do that by looking through the grill, each box has one; I open mine anyway because you just never know...

"Maman! Tu vois bien qu'il n'y a rien dedans!"* Max says, when he is with me. But my son wasn't with me this time and so I closed the empty box and scooted back over to my place in line.

The client ahead of me was requesting a virement.* (In France, the post office doubles as a bank). I learned that Monsieur had 653 euros in his account, 300 of which he wanted to transfer ailleurs.* I looked down to the fat yellow "privacy" line at the tip of my toes--a meter or so behind the client. Some kind of privacy!

"Mince!* A new guy," I thought, looking ahead to the guichet,* to the postal clerk on the other side of the glass wall.

"Bonjour," I said, moving up to the window at my turn. "I'd like to buy some stamps, please."

The postal worker fixed his eyes on some far off object, beyond my right shoulder. "Il n'y a pas de timbres," he said, stone-faced.

"No stamps?" I mumbled. Only in France does a post office not have stamps! At least not today, it appeared.
"Are you sure?" I questioned.
"We don't have any more stamps. Il n'y a plus rien."*

I looked over to the table-for-two, to my stack of packages. I had promised those orders would leave today--with "cool French stamps..."

The clerk had said "plus rien"--didn't that mean ALMOST nothing? Was there, then, something...anything?

My nose now flattened against the protective glass, I studied the clerk's desktop. "What about that folder over there?" I know that folder well. It is similar to an accordion envelope, only the walls inside are unconnected dividers. That's where the various stamps are organized.

He opened the folder. After some hesitation he mentioned, "There are a few of these..."

"I'll take them, please," I said, recognizing part of the Jules Verne timbre* collection. I happened to need 80 stamps, and this was a good sign. He flipped back through the non-accordion pages. "I've got some of these," he said, holding up a red stamp depicting Bécassine, cake-in-hand.

"That will work, thank you. Anything else... anything at all?"

Miraculously, and with the help of another clerk, enough stamps were "found" to cover the cost of mailing my books. I paid for the timbres and went back to the table-for-two to decorate the packages.

When all of the boxes were timbrés* and my tongue felt like velcro, I placed the stack inside the glass-encased turnstile and spun them over to the clerk for postmarking.

On my way out of the post office, I sidetracked back over to box number 32 and peered in. Because, just like the "no stamps," you never know...