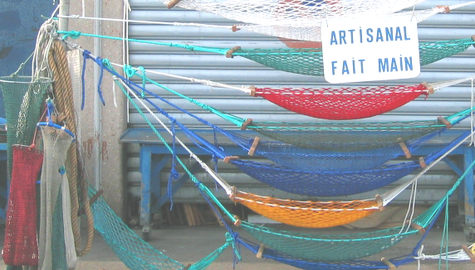 "Hand made." Hammocks for sale along the Grand Canal in Sète, France.

A pure soul is like a lovely pearl. As long as it is hidden in a shell, at the bottom of the sea, no one considers admiring it. But if you display it in the sunshine, this pearl sparkles... --Le curé d'Ars (Pastor of Ars)

After lunch, Jean-Marc and I strolled out to the quay, past the bateaux de pêche,* past the last seafood restaurant and its rebel fishmonger, past the Hemingway look-alike, who sat in darkness, hand-knotting colorful hammocks in a cramped garage facing the port.

Midway down the digue,* we spotted an opening in the seawall and climbed through to where a short paved incline gave way to a line of giant boulders fronting the sea. A few meters away from us, an old married couple sat in his-and-her fold out chairs, reading his-and-her magazines. If it weren't for the tourists filing by, just behind the seawall, you'd have thought the couple was chez eux.* Who needs an expensive seafront home when you have a pleasant (if public) terrace on the water?

The gentle slope of the digue suggested a post-repas* siesta. Taking the clue and minding the hard surface below, I twisted my hair into a thick bun and reclined back onto the makeshift pillow.

Jean-Marc returned from a swim, seashell in hand.
"C'est une arapède," he explained. I examined the coquille,* its conical shell resembling a miniature Chinese hat.
"Do you know the expression 'coller comme une arapède'?" Jean-Marc asked.
"When threatened," he continued, "the arapède will cling tightly to a rock, making it difficult to separate from the rock's surface--like a tiresome friend, or tagalong--as the expression goes."

Looking out to the sea, I noticed how the surface changed depending on the sky. The clouds floated to the sun and the sea became dull; the sun reappeared and the surface glittered--truly a sea of diamonds! Though the atmosphere was silent, the sparkling water, if you looked at it just so, was in musical animation; sunlight hitting the dancing surface of the sea created a salt-water symphony.

Something stirred inside of me as I witnessed the spectacular scene. Je suis l'arapède. I am the tagalong under the Chinese hat--clinging to my rock that is la France. Once threatened,* I now relax back before the diamond-capped sea and listen to the roaring chorus.