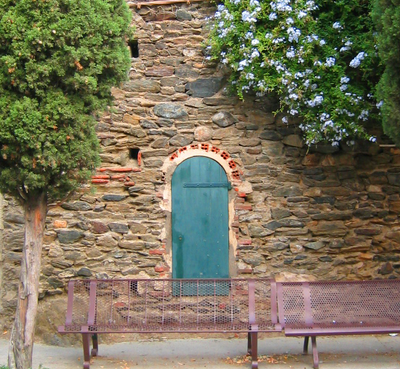 Cypress trees make me run for a box of mouchoirs...  Photo taken in Collioure, France

You are invited to join Jean-Marc and me in Phoenix, Arizona on October 29th. There will be a wine tasting / book signing at Sportsman's on Camelback (3205 E. Camelback Rd - East corner or 32nd St and Camelback Rd - www.sportsmans4wine.com (602) 955-7730) from 3-5p.m. Please mark your
calendars as we look forward to meeting you! For logistical purposes, please let  us know at contact@french-wine-a-day.com if you will join us for this event.
--
le mouchoir (moo-shwar) noun, masculine
1. handkerchief

In sentimental matters, one must never offer advice or solutions... just a clean handkerchief at a timely moment. --Arturo Perez-Reverte

At the dinner table, the children and I eat soupe de légumes.* Jean-Marc is hosting a wine-tasting event in Cannes, thereby missing out on his favorite autumn meal.

Between sipping, Max and Jackie are humming, and sometimes singing, the national anthem of France--La Marseillaise--which is just one of the perks of having Francophone kids.

I reach for the Roquefort. (Crumbling Roquefort cheese into a bowl of pureed vegetable soup is a delicious tip Jean-Marc shared with me some time ago.) My arm pauses mid-air as I realize there is just enough of the cheese to go into one person's soup. We might be able to divide up the moldy fromage,* but I'd rather have the decaying chunk all to myself...

I hold that thought, distracted now by my 8-year-old.
"Arrêtez!" Stop! I say, when Jackie won't quit fidgeting in her chair.
"Je ne suis pas plusieurs, maman, je suis une!" I'm not many, mom, but one, she says, in reference to my shoddy grammar (perk numéro deux* of having French kids--daily, sometimes hourly, corrections). "Arrête" (tu arrêtes!) and not "Arrêtez" (vous arrêtez) would have been the correct thing to say, and I do know better, but am distracted by serving dinner and keeping my Know-It-Alls in line. That's my excuse anyway.

Max sniffs and I tell him to go and get un mouchoir.* When he returns, I remind him to use the box of tissues at school if he needs to 'se moucher,' or blow his nose, during class.

"Il n'y a pas de boîtes cette année," there are no boxes this year, he says.

Jackie informs us that her class has a box of mouchoirs. "Il faut lever le doigt et demander à la maitresse pour en chercher," we have to raise our hand and ask the teacher (before) we get up to get one, she explains.

Max tells us that in his class each child must bring his or her own individual paquet* of tissues. "C'est trop personnel et un peu radin," it's too personal and a little stingy, he adds, preferring equality, justice and one box for all.

My son's remark has me contemplating the moldy mass I'd so coveted. "How dull the soup will be without it!" I think, pushing the Roquefort across the table, to The Perks, who've resumed humming la Marseillaise.