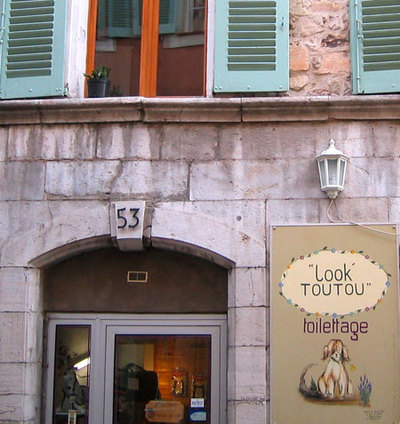 zinguer (zehn-gay) verb
...would that today's word translated to 'zinger' or 'a striking or caustic remark' but no, it simply means 'to cover with zinc...' Useful, no?

Dominique and I sat out front of le Café du Commerce watching the metal-toothed dragons file by. Make that "les Dracénois," or "inhabitants of Draguignan" for, being teenagers with angst firing from their metallic mouths (braces...), 'dragons' seems like a fun, if not a fitting, term of endearment.

"C'est nul, Draguignan!" one ado* said to the cluster of teens around him. "Il n'y a rien qui se passe ici! Nothing's happening here!" My friend and I sipped our tea, smiles of complicity growing across our faces. Depending on how you looked at Draguignan--a town named after the legendary dragon that inhabited the Rhône River in the 13th century--the place could be dead or divine.

Take the painted and etched building fronts, for example, and the raison d'être* for our visit (besides tea and a tchatche*). Around every corner we were awed by another old, swirly-lettered sign. "I think it is called signography or typography or... " I searched for a term, real or made up, for the beautifully-lettered signs. "Lettrage, for the pretty letters," Dominique volunteered, "and 'enseignes' for those kinds of signs--which give information--or 'ren-seigne-ments' about the shop."

We strolled along the cobbled path, studying the painted 'devantures,' or shop fronts, deciding that they were either "vieilles,"* "très vieilles"* or "modern." We were making our way to the old part of the city via la rue de l'Observance when Dominique paused. "Look," she said. There, across the narrow street, high up on the side of a building, was an old painted advertisement for pharmaceutical products. How many times had I crossed it and never noticed it? The sign was so faded from la pluie* and le vent* that you had to stare until the pink and gray words (formerly vivid red and blueberry bleu*?) came into view: "Pastilles Bel suppriment la toux." ("Bel lozenges suppress coughing.")

We followed the serpentine road to a small square, known as La Place aux Herbes, where the old writer's café, 'Mille Colonnes,' sits like a bookend on one side of the quiet placette.* There, we spontaneously turned right.

Along rue des Chaudronniers,* the homes and shops--connected one to the other and rising three floors skyward--were both dilapidated and proud. One woman in a housecoat stood on a doorstep, a bucket of water beside her, mop in hand, eyeing my friend and me as if we'd just landed our spaceship over at the placette.

Further down the path, where rue des Chaudronniers becomes rue du Jeu de Paume,* I backed into a corner to snap a photo of an enamel street sign when the scent of urine filled my nose. I jumped out of the alley to rejoin my friend who waited in front of the toilettage* boutique. Two shops down, a woman with a shaved head, heavy frame, and a piercing ring in her right brow stood in front of a bar, sanding an old green shutter and pausing to offer a warm bonjour.

Rounding another block of homes/shops, and not far from rue Blancherie, we stumbled upon a colorful, letter crowded sign--one of the words jutting out like a poppy on the first day of spring. "'Zinguerie'--what a word! What does it mean?" I asked my friend. Without missing a beat, Dominique knocked on the metal pipe running up the building behind me. "It has to do with zinc work, like in plumbing."

Lastly, we entered the ancient tannery section, with its crumbling buildings and pigeons peeking out from the missing slats of the window shutters. There we rejoined the cobbled road to the Café du Commerce where we would soon encounter the metal-toothed dragons and know, with a shared smile and clink of the teacups, that the city is not dead, but rich and lively if one will only see, literally, the ancient writing on the walls.

Exercises in French Phonics is...
" a great book for learning French pronunciation" Order your copy here.

I Heart Paris Shopper: made of recycled material

Tune Up Your French: Top 10 Ways to Improve Your Spoken French