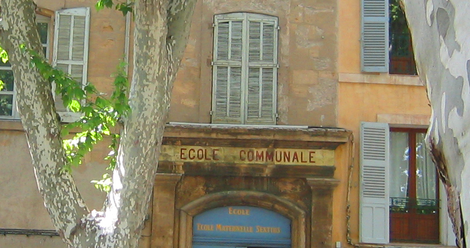 Parler est le plus moche moyen de communication. L'homme ne s'exprime pleinement que par ses silences. To speak is the most lousy means of communication. Man can only fully express himself by his silence. --San-Antonio

A Day in a French Life....
On the way home from my children's school we drive up the narrow one-lane road, passing before the dilapidated hen house whose inhabitants flew the coop decades ago. I roll down my window to enjoy the sound of the cascade just behind the old mill. It's a good day when no cars are descending the one kilometer passage, and we reach the top of the road in record time.

From the back seat, Max is complaining about the new kid at school, who he refers to as "Le Parisien."* Le nouveau* wears an earring and "acts all cool, when really he is MOCHE!"*

La Jalousie*--the so-called Green-Eyed Monster or "Monstre aux Yeux Verts" if you like, is alive, well and rearing its ugly head in our corner of southeast France, thinly disguised in the grumblings of my son.

Soon I learn that Mr. Moche can really "tire" or kick the ball; turns out he has been scoring a lot of soccer goals in the schoolyard and even when he misses, he shouts BEWT!*

Jackie and I are still nodding our heads in sympathy with Max when I pull the car into the driveway. Inside the house, we watch cartoons while eating sandwiches au jambon,* washing the sandwiches down with ice cold milk in which the kids have added mint syrup.

"So, tell me more about the Parisian, Max. Maybe you're just a little jealous?"
Max smiles into his plate, but he can't hide.
"Maybe that kid can kick the ball... just as good as you can?"
"Mais, non!"

I continue to probe until Max's grin grows so wide his ears lift. The smile wrinkles around his eyes deepen, forcing his lids mi-clos,* but I can still see that sparkle. And, bit by bit, my son looks a little less green-eyed, a little less monster. La jalousie, washed down, along with the mint-flavored milk.

Words in a French Life: "...a heart-winning collection from an American woman raising two very French children with her French husband in Provence, carrying on a lifelong love affair with the language."