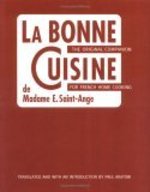 Translated into English for the first time since its original 1927 publication, La Bonne Cuisine has long been the French housewife's equivalent of... The Joy of Cooking--a trusted and comprehensive guide to "la cuisine bourgeoise" or home cooking... Julia Child called LBC "one of my bibles"... --Publishers Weekly.

A Day in a French Life...
Almost as soon as I arrived at the airport in Marseilles and took up residence with a certain Marseillais,* the dinner parties began. What my new French boyfriend could not sympathize with then was my complete malaise in cooking for others. This ranged from an exaggerated fear of a guest finding a peroxided hair in his or her soupe aux légumes* to the French discovering how fade* even tartiflette* (strong cheese melted over potatoes) can be when prepared by a failed student of home economics.

Understanding from the get-go what it meant to be up against the French in the kitchen (a feeling similar to what it is like to be the odd one out on a beach full of monokinied underweights* along the French Riviera), I searched for a solution and found one: fajitas. Mexican food would be the one thing I could prepare by which the French could not compare notes or, worse, judge against the national standard (as they could gratins, quiches, soufflés or mousses). Even a flopped fajita could pass inaperçu* given that the French would not know how a fajita is supposed to turn out in the first place. Besides, how can you mess up a fajita? (Read on.)

And so it was that I served fajitas each and every time the French were invited over. Simple: grill the chicken, slice and fry red and green peppers, onions, put out plates of sour cream, grated cheese, guacamole, diced olives... My plan worked and an added plus was that the French (accustomed to four-course meals) were distracted enough by the do-it-yourself "build one's own" aspect of the fajitas that they forgot to question the absence of the two other courses. With the vegetables of a starter, the meat of a plat principal* and the cheese of a cheese course all rolled into one, I had stumbled onto a 3-in-1 shortcut. Secure now in my two-course offering (I served homemade chocolate chip cookies for dessert--a hit!) I could relax. (For a time.)

At some point my stock of frozen tortillas (gifts from friends coming over from southwest, USA) ran out. But I soon discovered boxed tortillas at the grocery store's produits étrangers* section. One night, as we sat at our table with two other families, the littlest guest suddenly dropped his 3-in-1, as one might drop a biscuit riddled with maggots. With that, he shouted the equivalent in French of "These are really gross!" The boy's mom swiftly reprimanded him, but it was too late. Though fleeting, I had seen the commiserative look on her face.

In the end, it turned out to be the boxed tortillas that were dégoûtantes or 'gross'. (Jean-Marc assured me that the little boy was probably expecting to bite into a crêpe, and was sorely disappointed to discover a tortilla). Even so, I never made fajitas again.

As I replace Mexican fare with the occasional gratin, quiche or soupe aux légumes, I am beginning to understand that it is not the French whom I am up against in the kitchen but one nervous, peroxide-haired cook.