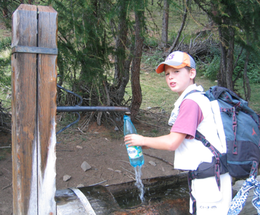 501 French Verbs includes a bilingual list of more than 1,250 additional French verbs, helpful expressions and idioms for travelers, and verb drills and tests with questions answered and explained.

Feindre, c'est se connaître. To pretend is to know oneself. --Fernando Pessoa

A Day in a French Life...
Not an hour after I'd chauffeured a very high-spirited Max to school, the principal rang to tell me that my ten-year-old was fébrile* and would I come to pick him up? "Did you hear that? Il a toussé,"* the principal said, referring to the cough in the background. I recognized Max's cough--the feinte* one, that is. Now one French verb, "feindre," to fake, took over my mind but I set it aside, reminding myself to withhold judgment.

At the principal's office, I recognized the expression on my son's face, which said: "I am only guilty of not looking as sick as I am." We'll see about that! I thought, studying the malade* whose crooked smile told me more than a thermometer would.

No sooner had I pulled the key from the lock, having closed our front door, and Max had pulled the couette* from his bed and was comfortably settled on the couch. In the kitchen, I bit into a tablet of paracétamol* and placed the crumbled half in a teaspoon of cerise* jam while listening to my patient's woes (underscored here and there by that familiar cough) from the next room.

"Ça va mieux, Max?" Feeling better? his sister asked, returning home for lunch and joining him at the table. "Tu n'as pas l'air malade!" You don't look sick, she added. Max ignored her and helped himself to a second serving of gratin dauphinois* before tearing off another sizable morceau* from the baguette.

It was while polishing off half a barquette* of strawberries that Max gave himself away. "I can always take the math exam tomorrow," he mumbled, as if to convince himself.
"Math exam?" I reacted, eyes narrowing.
Max looked up, surprised by his inadvertent slip of the tongue.
"Exams make me cough, too!" I snapped, reaching for the gratin before Mister soi-disant* Malade went back to polish that off as well.

'Words in a French Life'. Ask for it at your local bookstore or order it here.