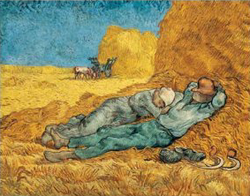 la méridienne (may-ree-dee-yehn) n.f.
1. siesta, nap
2. type of sofa/couch whose seatback gradually descends from one side to the other (a.k.a. "fainting couch," "Grecian couch" or "gout couch" and, in French, "recamier" or "chaise longue")

A Day in a French Life...
Just as I close my eyes I hear the slam of marteau* against concrete. The neighbor's pool house is under construction. Any silent gaps in between the hammering are filled in by yapping (the neighbor is after her kids again): "Taisez-vous! Descendez de là! C'est assez!"*

...Unfavorable circumstances in which to sieste.* Better to go with the flow, or 'suivre le moment' as they say in French.

I follow the moment. The wicker chair beneath me creaks as I shift to get a different view of the jardin.* My eyes scan the olive trees and the citrus-scented hedge of pittosporum next to the boules* court before settling on the pelouse* below where they catch on an ant as it marches along the top of a bent blade of grass. When the six-legged fourmi* gets to the cliff end it curls its body under and just keeps walking, this time along the belly of the blade. Over on the patio, a black scorpion scurries across the flagstone when the cushion it was hiding under is raised. I spring from my chair. "Careful, Jackie!" I say, and go to help my daughter flick the creature into a confiture* jar for examination and eventual release at the far end of the yard--where Jean-Marc planted sardines for the kids last year. Yes, sardine planting. Have you never heard of it? According to my cousin Murielle, amateur gardener and sometime camper, the French don't "pitch a tent"--they "plant sardines"! The expression stems from the shape of the metal stakes that are hammered into the ground.

Speaking of hammering... my eyes travel over to the row of newly-trimmed cypress trees separating our yard from the neighbor's. I realize the marteau has stopped. Ahh... I close my eyes and settle in for a twenty-minute méridienne* only to be startled when the yapping begins again. Poor weary mama next door--she could use a siesta, too.

And 'meridian' finds its everyday usage in AM/PM (ante meridian and post meridian) (ante: before; post: after)

Permission to Nap: Taking Time to Restore Your Spirit "Like our French sisters, who enjoy a 35-hour work week, or in Spain, where a siesta is a must, we can come to enjoy, embrace and revel in a little lovely shut-eye. " --from the publisher

The Art of Doing Nothing "Beautifully illustrated with Erica Lennard's photographs, The Art of Doing Nothing gives us permission to celebrate idleness in all its mesmerizing forms. Véronique Vienne's delightfully informative essays on the art of breathing, meditating, bathing, listening, waiting, and more offer useful tips on such skills as how to whistle, stay in the moment, take a nap, cure a cold, or watch the sun set over the horizon." --from the publisher

Book: Tune Up Your French: Top 10 Ways to Improve Your Spoken French