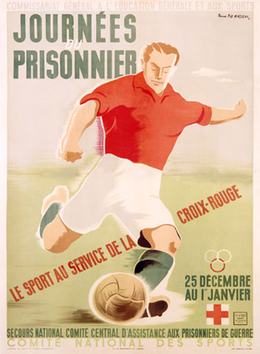 "French football"... Check out the vintage poster and note card.

Le but n'est pas le but, c'est la voie. The goal is not the goal, it is the journey. --Lao-Tzu

A Day in a French Life...
Across from my desk, the long-legged bistro chair looks past the undressed window to the green grass on the other side. Two four-foot tall goalposts flank that oblong terrain of pelouse* above which the cheers of children form a delightfully audible ozone.

When my fingers come to a screeching halt on the keyboard, I sometimes look up from my desk to check on the action out on the field. The scissoring legs of the soccer players, which guide spinning ball to net, seem to unscramble my brain until I have scored my own mot juste.*

Today Max and his friends Clem, Luca, and Alex are playing. Clem kicks the ball shy of the goal to the other end of the yard. Following the ballon,* my eyes leave the little window to my left and pick up the scene, stage right, thanks to the French windows on the next wall. There, I see Max hop over the flagstone path and continue chasing the ball which stops short of Jean-Marc's vineyard
(...currently four rows of vines including Syrah, Grenache, and Mourvèdre). With the action completed my eyes return to the computer screen only to dart up moments later when I hear a crashing sound. The soccer ball has flown through the narrow opening of the window.

Max freezes beneath the chestnut tree. As he drags his feet toward my office I am given the time I need to decide how I feel about the unexpected blast. For that, I look for clues on my 10-year-old's face: half smirk, half whipped-dog. I take a quick inventory of my office--nothing broken, just a pile of letters which have shot from my desk and fallen to the ground like a flurry of chicken feathers. In the seconds that follow, Max enters the room, head held low, eyes peeking out from beneath his brows. The friends on the soccer field are at a standstill, waiting for the ruling decision: will they be sent home or will the game continue?

It must be that fire of hope in my son's eyes which reads "Pardonne-moi, maman,"* for when his questioning look meets mine, the answer is easy and I reply:

French Idioms & Expressions:
aller droit au but = to get straight to the point
aller sans but = to wander aimlessly around
être encore loin du but = to have a long way to go
n'avoir aucun but dans la vie = to have no aim in life
dans le but de faire = with the intention of doing
marquer un but = to score a goal
de but en blanc = point-blank