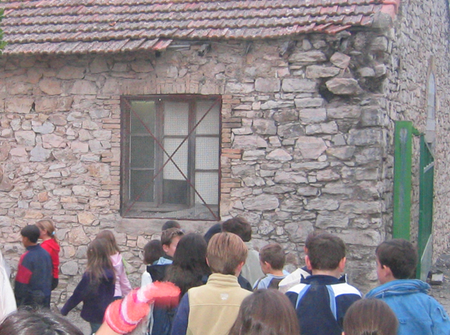 Only eleven years old and already on the way to collège...

In books: La Belle Saison -- a testament to the timelessness of the French countryside and to the generous-hearted French.

Today's word is one of those faux-amis*...

Marching two by two along avenue Gambetta, we follow the tail-end of the Mistral--the wind that whipped through the village the previous day, knocking over our mailbox and blowing every stiff sock and chemise* from the clothesline.

"Look how they've grown!" another mom remarks, as we herd the children along in our flip-flops, envious of the line's leader, wearing high tops. Apart from differences in footwear, we have a common goal--to keep sixty-five excited eleven-year-olds on the narrow trottoir* as we walk away from the village, beyond the train station, to the collège,* where the fifth-graders would graduate after summer break.

On this, the anticipated journée découverte,* now seated in the auditorium and listening to the vice-principal, we learn that casquettes* are allowed only in the outdoor cour,* cell phones must be turned off on the premises, and that em-pay-twahs* are permitted in certain areas of the campus. In addition to regular classes, the future collégiens* will be asked to select one of six electives: patrimony, theater, art, sports (in this case, le cirque*), water (a regional subject), or music.

"Et si on se trompe de classe?" And if we go to the wrong class? the kids worry.
"Et si on se perd?" What if we get lost? they fret.
"Don't worry. There is a map!" the vice-principal assures them, before ordering the future collégiens to line up for the canteen.

In the cafeteria we join the "old-timers" and their teen angst to lunch on zucchini salad, dinde,* chou-fleur* and pasta. Over dessert, the reality of leaving grade school to enter collège hits home.
"Et si on nous embête?" What if they bully us? the children whisper, watching the 8th graders in line push each other around. I have to admit, the kids have expressed my very own fear. What if one of those big guys picks on Max? How will my son react?

I look out of the cafeteria window and notice that the Mistral has picked up again. Like the vent,* which stirs the leaves and knocks the socks from the clothesline, so are the junior high bullies--sometimes fierce, often feigned. They eventually wane, just like the wind that blew out of town this morning, while we marched on and on in its wake.