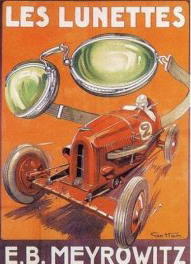 In books: Murder in Montmartre by Cara Black
"If you've never been to Paris, or you'd like to go back soon, let Cara Black transport you there."-Linda Fairstein

A Day in a French Life...
Last week I stopped at the lunetterie* to get my shades repaired. The shop assistant smiled from the back of the store, pointed to the telephone at her ear, and said, "J'arrive!" I'll be right there!

She needn't have rushed. I'd already put up with the sunglasses this long as they tumbled down my face or sat lopsided like a parked teeter-totter on the bridge of my nose. The lenses, which are "de vue,"* had begun popping out ages ago. How many times had I picked up les verres* from the sidewalk, only to wrestle them back in again?

I have never known an optical shop to charge for a frame adjustment. So I always feel uneasy as the lunetier* puts paying work aside to tend to my lopsided specs. This time I made sure I had some cash on hand.

When the boutique assistant put down the phone and said, "A vous, madame," I showed her my glasses, apologizing for their tattered état.* Next, I watched her push and mold the frame back into shape. "Essayez-les,"* she said now and again.

Once the lunettes* were adjusted and snug against my face, I promised I would never again push them back as a makeshift hair band (the reason for their current condition).
"Combien je vous dois?"* I asked, just in case.
"Rien," Nothing, smiled the optician.
I reached into my pocket and handed her the pourboire* that I had prepared.
"RIEN!" she insisted.
"Merci," I replied, mumbling something about needing a few cartes postales* and, in a haphazard fashion, pulling together a half-dozen cards, trying to get the total to add up to five euros.

The shop assistant counted the cards. "Trois euros soixante, s'il vous plaît."* she said. I handed her the five euro note and told her to please keep the change.
"Non," she said. With that, she looked at me straight in the eyes and said firmly:
"Les bons comptes font des bons amis." Good accounts make good friends.

...and in English there is the phrase "lunette window" for the piece of cloth that covers the eye of an ornery (lunatic?) horse.