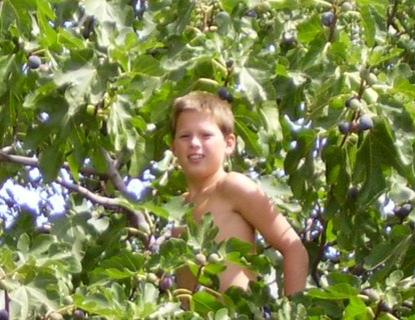 Mes Confitures: The Jams and Jellies of Christine Ferber. "This book, a best seller in France, presents dozens of recipes, organized by season, for preserves from Black Cherry with Pinot Noir to Greengage and Mirabelle Plum with Mint; a number of them includes chocolate, not a standard addition."--Library Journal. Order it here.

Truth is not made to console like the buttered bread with jam that we give to children who cry. You have to look for it, that's all, and distance from yourself all that is not (truth). --Gustave Flaubert

A Day in a French Life...
I walk into the kitchen to find my husband kissing a bottle of vanilla extract. He'd been searching for this key ingredient and, in finding "her" (French vanilla is undeniably feminine), was overcome with emotion.

The cupboards are wide-open, baring their spiced, sugared and cereal-boxed souls. The sink is full and the countertops have disappeared under a bumpy rug of lemons, figs, odd jars and cooking utensils. A toy helicopter, some binoculars and a map of the French Alps figure into this chaotic scene, inviting the question, "What's wrong with this picture?" On the stove top four casseroles
quiver and spit.

If real French men make confiture* they don't seem to wear aprons. Mine's got on a bright orange T-shirt which reads "Châteauneuf-du-Pape" and which does not co-ordinate with his two-tone swim trunks in teal and gris.*

My eyes dart back to the storm of ingredients and impostors scattered across the counter. "Do you know what you are doing?" I inquire, concerned. "Non," Jean-Marc answers, casually, and with a smile. With that, he picks up a carton of sugar and swirls the downpour over the bubbling, frothing fruit.

If I were the one making jam, I'd have scoured the sink, cleared and disinfected the countertops, scrubbed the figs. I'd have worn a shower cap, a stopwatch and a furrowed brow. I'd have taken the phone off the hook and lined up all the needed utensils by order of appearance before hyperventilating over a well lit, perfectly propped open cookbook. But then, I would never get around to putting together such a perfect environment in which to make perfect confiture. The jam wouldn't get made. That's why Jean-Marc is le confiturier* around here.

I look around our imperfect kitchen, to the messy counter, where my eyes focus on the cookbook which has been tossed aside, landing face down. Jean-Marc is not even consulting the recipe except to see what the major ingredients are. There is not a scale or a measuring cup or spoon in sight. He is cooking au pif* again, guessing his way through the jam-making process. But will the result be any good?

It will if last year's batch is any indication, and besides--what a silly question. I have lived the answer! In anticipation of "Jimmy's* Jam," I have crawled out from beneath our fig tree, my legs en compote,* my hair a nest of fig droppings (the tree's branches having teased it to heights and gnarls no fine-tooth comb could achieve), my knees scratched, my skin aflame, to arrange this year's fig harvest in a two-tiered basket at the foot of our Maître Confiturier.* You know, "He who can't take his lips off Mademoiselle Vanilla".

From Publishers Weekly
Starred Review. Translated into English for the first time since its original 1927 publication, La Bonne Cuisine has long been the French housewife's equivalent of The Fannie Farmer Cookbook or The Joy of Cooking—a trusted and comprehensive guide to "la cuisine bourgeoise" or home cooking. Order a copy here.

More references to French jam in these books: