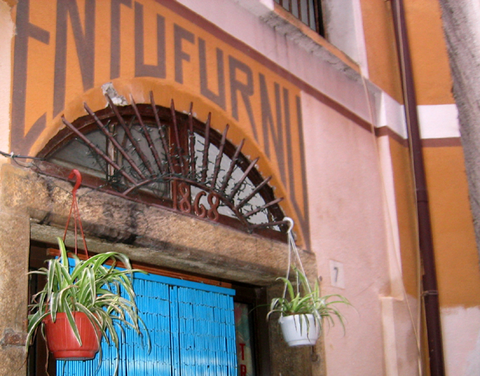 Un vieux four est plus aisé à chauffer qu'un neuf.
An old oven is easier to heat than a new one.
--proverb
A Day in a French Life...
The Italian set down his container of raisins* opposite an antique grape press before turning to lift the heavy crate that linked my hand to my husband's.
"Thank you for your help," he said. "My name is Dario," he added, offering a free hand.

Dario the vigneron handed us a few dusty, unlabeled bottles of home brew before ushering us into the oven. (If this were a horror story, the setting would be fit: two foreigners lured (with the promise of lunch) into a dark cave, handed a few liters of wine for self-marinating, and asked to step into the oven--only to become lunch!)

As it was, Dario was inviting us to his home/trattoria* (so-named "Entufurnu," or "IntoTheOven," according to the hand-painted panneau* above his village door). I parted the colorful beaded curtains and entered a narrow dining room just a poil* bigger than the long wooden table in its center. On the right, where a coat rack might have hung, was a painting of a naked woman, just like in the three other cafe/bars we'd frequented in the past 24 hours.

Once upon a time, Dario explained, and in the place of the current kitchen, there was an enormous oven for baking pizza. While Dario showed us to our seats, Esmeralda, the woman in the cherry red scarf, came out of the oven to greet us, her wide-toothed smile as heavenly as the scents wafting in from the kitchen behind her. "Sit down," she said, her Spanish accent but a hint of her Honduran origins. Soon the tabletop teemed with casseroles, carafes and conversation as we shared spaghetti alla napoletana,* entrecôte,* local cheese, homebrewed wine and Dario's signature grappa.

And, just like that, we spent the afternoon warming up to complete strangers in the Ligurian town of Ceriana, only to quit that big old oven uncooked, uncorked, and uncommonly catered to in a little village along the northern coast of Italy, high up in the quiet hinterland affectionately known as the Riviera of Flowers.

Falling Palace: A Romance of Naples