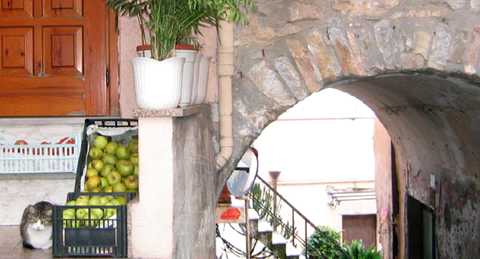 "Little House: An Architectural Seduction" -- is a forgotten masterpiece of 18th-century literature that has become an underground classic among architects.

A Day in a French Life...
Feeling small as a mouse before the towering cathedral in la Piazza Rubini, I listen to the Italians call up and down from their tiny balcons* and wonder if the town of Ceriana has anything in common with the word "serenade." After all, this is just what the Ligurians are engaged in as the cloche* in the belfry strikes twelve--only it isn't a moonlit midnight, it's midi,* and the villagers aren't singing about love, but lunch.

Jean-Marc and I are in Ceriana, on the Riviera of Flowers,* for both lunch and love. Love, because a mystic Roman village hidden in Italy's emerald-green hinterland makes for an enchanting place to celebrate twelve years of living in common, and lunch because, tout simplement,* where love is, hunger follows.

Related Terms & Expressions:
la souris grise = house mouse
La Petite Souris = the tooth fairy (In France, a mouse, not a fairy, is in charge of payment.)

...and while some of us would like to be "a fly on the wall," the French would prefer "to be a little mouse" in order to spy! (From the expression "être une petite souris".)

Eat, Pray, Love: One Woman's Search for Everything Across Italy, India and Indonesia

Italy for the Gourmet Traveler by Fred Plotkin