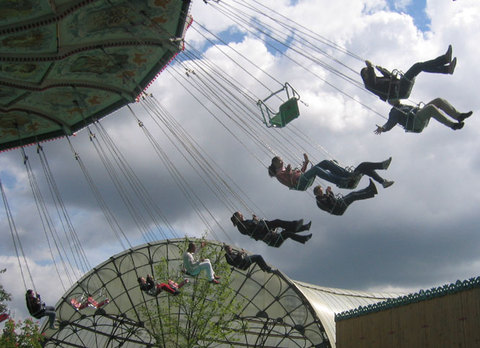 The first thing the bearded man in 34D said to me was, "Can we trade seats?"
"No," I answered, before cramming my manteau* into the crowded overhead compartment, careful not to make eye-contact with the solicitor lest I give in. When the man persisted, I buckled my seatbelt and pulled it tight.
"I'm sorry but I'll need to keep the aisle seat," I replied. "I've reserved it."

Discouraged, he turned to the young lady to his right, in 34E:
"Are you sure you won't trade seats with me?" he pleaded.
The demoiselle's* eyebrows shot up along with the corners of her lips and her head shook. She wasn't going to budge either. 34E and I looked past the man who stood between us, exchanged un clin d'oeil,* and joined forces with a high fiving nod.

I pitied the man who found himself sandwiched in a row of three, but not enough to give up my aisle seat. He'd, be okay, I reasoned. He was younger than I, probably less claustrophobic, and, apparently, persistent. I'm sure he could persist in that middle siège* for another nine hours--all the way from New York to Paris. Besides, I argued, I wouldn't do him the disservice of compromising another (me) for his own comfort. That would be bad karma (for him). No, I wouldn't wish that upon him.

I am only just beginning to understand that glossing over one's own needs only serves to dull another's reality, which is no good for either party. (And, judging from the beautiful (and stubborn) demoiselle in 34E, I'd say the man in 34D's reality would soon be close to sparkling).

Bellodgia By Caron For Women. Introduced in 1927. Fragrance notes: a rich bouquet of fresh cut carnations and roses. Recommended use: romantic.

France Pillow -- whimsical & hand-embroidered, will dress up any old siège