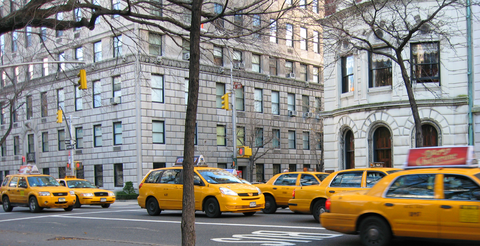 Taxis (and their shiny pare-brises) in New York City, where I traded country life for cosmopolitan over the weekend.

Read French language magazines ....for a fun way to improve your français.

Listen to Jean-Marc recite the above quote (play clip twice, as it skips): Download pare-brise2.wav
.

At Terminal 2 in Nice, a French stewardess in a sleek queue de cheval* makes an announcement over the loudspeaker to the group waiting at gate 22:
"Boarding for flight 83 to New York is about to begin. Please remain seated and wait until your row is called."

Almost as soon as the microphone clicks off, the passengers casually crowd to the comptoir* where we proceed to queue up in one non-linear cluster, passports and boarding passes in hand.

When a handful of first class passengers has disappeared down the ramp, boarding comes to an abrupt halt and another message pipes in over the loudspeaker....
"Due to a technical issue, we will need to stop boarding at this time."

During the wait that ensues, my eyes travel over the international voyagers, looking to pick up a good tip or two for a future overseas flight. I see a lot of compact carry-ons and regret overpacking (my own tote bulges and the zipper tabs, broken off long ago, have been replaced by sandwich bag twisties). I observe so many pairs of sensible shoes and loose-fitting clothing (and pat myself on the back for not wearing my new jeans--easily a size too small--and the three-inch high-heeled boots. I'd heard about a woman made barefoot after passing through an airport security check. Removing her boots for the x-ray machine, she was unable to reboot after her feet had swollen from hours of international travel).

There is a floor-to-ceiling window overlooking the runway and the mid-morning sun is burning past the glass, causing passengers to remove their heavy coats and extra layering. While the travelers are quick to chat about the heat, I notice how nonchalant everyone seems to be about the technical issue which isn't mentioned. It is true that the French are known for their technical prowess, I reason (witness the Concorde). Of course I shouldn't worry, I tell myself.

Just when I begin to relax, the American standing next to me gasps:
"I can't believe what I just saw!" she says, pointing to our airplane outside.
"What?" I ask.
"One of the technicians just poured a bottle of water over the windshield!"
Dumbstruck, our silence is broken when a lady stroking a French poodle rolls her eyes and reacts, blasé as ever, to the window repair. "Très high tech," she quips.

While the woman's humor put us at ease, I wish I could say we laughed all the way to New York, but the truth is my faith in the pare-brise prowess of the French was only restored when we safely touched ground at JFK.*

Trivia
On pare-brises across France, you'll find a small green stamp or "vignette automobile"-- evidence that the motorist has paid the annual tax for the vehicle in question. Car owners are obliged to buy and display the special fiscal sticker on the window of each vehicle in circulation.