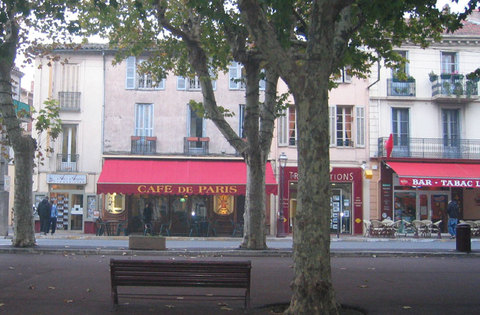 Les Arcs-sur-Argens, where our story begins....

While "les baffles" is an informal term, accoustic speakers are originally known as "les enceintes".

("Enceinte" is also the French word for "pregnant"...which gives a new name to stereo speakers ("preggers".)

Reaching for my seatbelt, having put the key into the ignition, I was startled by an abrupt shuffling sound. Frozen in place with my eyes scanning the front of the car, I let go of the ceinture* and threw my torso around. "Haaaaah!" said I to a backseat minus one crazed cambrioleur.* With no one there I relaxed.

When the noise returned, this time toward the front of the car and in a rapid succession of knocks, I sprang back into place, my eyes wildly searching for the source du bruit.* Silence....

The knocking returned and with it another fear-induced jolt. Bon. Calme-toi,* I reasoned. Looking over to the side mirror, I became convinced that someone was putting a new twist on Ding Dong Ditch only I hadn't seen a French kid run off after "dinging" and no giggles could be heard.

The next thump-thump-thump! had me jumping out of my car, convinced the knocking was coming from within. Having sped 'round the vehicle, checking front and back floorboards once again, all I could come up with were three tennis balls, two empty water bottles, and a few harmless candy wrappers.

A pop-pop-pop! now sounded, loud and clear. Remembering the recent extreme weather shift, I thought to myself (in a silly me fashion) that, obviously, a large block of ice was melting, causing the car's frame to implode and, hence, that sound.

When the beating resumed, this time with an organic twist, I made a snap decision to abandon plans to drive to Puget-sur-Argens. No way I'm getting back in that freaky car--something is dying in there!

Indeed, the sound was that of the living. Some struggling beast was trapped somewhere in that car. The sound was coming from the driver's side door. I put my hand to the door to see if I could feel a lump moving... Enough--I'd heard it!--but to go any further would be to see "it" and I didn't want to put a beady-eyed face to this abominable sound.

Meanwhile, the clock was ticking and I would be late for my appointment. I decided I could probably drive bête à bord* for the next forty-five minutes, reaching my destination on time. But it was the image of a rat gnawing through the door panel and scurrying across my car only to come to a screeching halt on my shoulder--and the screaming and swatting that would ensue--that discouraged
me.

I knelt beside the car door, putting my ear to the panel. A circular metallic sound could now be heard followed by an explosive "spit-spit-spit!" beating that I'd originally taken for a knock. The whirring in-and-out static brought to mind a 1950's sci-fi film in which an eccentric scientist tries to establish
contact with Mars. The sound I was hearing was like a channel shifting transistor radio. By then, my ear was right over the front stereo speaker where, coincidentally, the sound was strongest.

Just before my mind drew up the image of an alien rat stuck inside the front speaker, a moment of lucidity came over me and, remembering the car's faulty stereo system--always set to blast on contact and (this time, it appeared) stuck between channels, I shot up, shut off the ignition, and silenced the imaginary beast once and for all.

Audio clip: Listen to Jean-Marc pronounce the French word for "speakers" (and listen, along with wide-eyed me, to that "l" that is miraculously present, contradicting the first paragraph of my story...!): "les baffles" Download Baffles.wav