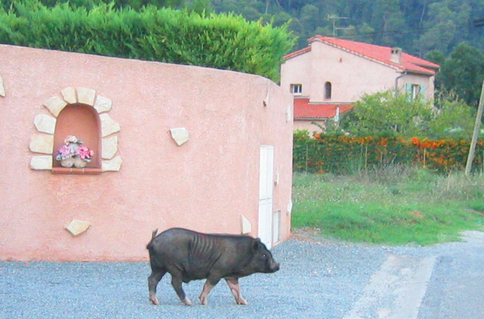 Today's totally unrelated to the word or story photo: Wayward Sanglier. (We'll just have to call this little guy--observed trotting through my neighborhood, cares to the wind--"Bahut".

Monsieur and Madame D., in taking pains not to track dirt inside the house, all but left their shoes out on the bristle paillasson.*
"Ne vous inquiètez pas. No worries. Please, come in!" said I.

I took Madame's coat, then Monsieur's, turned on my heels and, along with my guests, paused before the busy coat rack--the one place I'd forgotten to unclutter. Eyeing the heap, which included Jackie's wool scarf, the dog's laisse,* Jean-Marc's three-quarter manteau,* Max's K-way,* a beret, a casquette* and my own camera bag, I realized I had but one trick left up my sleeve: A great toothy grin which drew my guests' attention away from the mess as I invited them over to the next room.

In the salon we gathered around the laptop to listen to Jean-Marc read aloud from the promesse de vente.* A lot of "Ça veut dires" and "bien entendus" were explained and confirmed before my husband printed out four copies of the promise papers on which sixteen sets of initials along with sixteen signatures were penned across the pages.

Business out of the way, we took seats around the table basse* where champagne and my belle-mère's* not-to-be-rivaled spicy black olive tapenade* were set out.

Relaxed, our buyers began to arrange their furniture.
"Your mother's armoire would go nicely there," Monsieur D. said, pointing a glass of bubbly to the wall beside the cheminée.*
"Tu as raison," You're right, Madame agreed, adding that they might place the bahut* along the wall off the kitchen.
"Très bien. J'allais dire la même chose!" Very good. I was about to say the same, Monsieur D. enthused, complimenting his wife. Next, they puzzled over where to place the television....

As Monsieur and Madame D. mentally arranged their future nest, I lost myself in my own reverie and pictured a cozy living room, Monsieur in his warm-up suit, Madame setting aside her knitting to check on that wild asparagus quiche turning golden-brown in the oven; Monsieur exclaiming "Ça sent bon, Cherie!" that smells lovely, Darling, Madame returning to the room, to the acajou* bahut and selecting a few of her grandmother's Limoges dinner plates with which to set the table, Monsieur setting aside the morning paper, Var Matin, to assist his once blushing bride....

Monsieur and Madame stood, with Madame feeling a bit "light in the head" from the champagne. Waking from my bucolic dream, I noticed the longing* that I had felt earlier had vanished; in its place a welcome feeling of detachment. My home would be their home.

One hundred more stories from this French life, here.