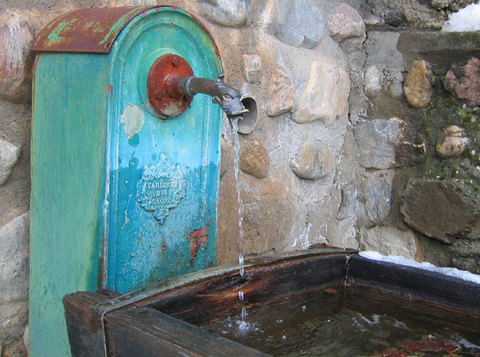 Water to "spare" in the French Alps at Villeneuve-la-Salle

Check out SmartFrench --"the smart way to learn French"

(from the military (slang) term "rabiot" (surplus / what remains after distribution)

.
A Day in a French Life...
by Kristin Espinasse

Every French kid sprints when the chef cries out "Il y a du rab!"* (that is--when it is a matter of greasy, crispy frites*). Like the French, I sprinted when the cook shouted "Seconds!" only it didn't matter what was leftover. I loved canteen food and adored cafeteria culture. From selecting an ice cold carton of whole milk to watching the ladies in hairnets plonk another helping of mashed potatoes onto a divided tray, steam rising up and giving the women's round faces a healthy glow. They looked as if they enjoyed mashed potatoes too.

The French women that my son sees behind the thin glass partition are petite, fragile-nerved and wear long faces. "Du calme!"* they shout. "Ça suffit!"* While I don't remember any hollering back at my canteen, it seems to me those soft-spoken servers from my childhood wore halos above their hairnets (or maybe love is coloring my memory, as I did and still do adore mashed potatoes and
ice-cold milk).

You won't find cartons of fresh milk in France, but tall glass pitchers of eau potable,* and my son doesn't get to break apart one of those starchy commercial buns but enjoys a golden crisp baguette with his meal, the latter a handy French utensil for pushing scattered pois* onto the fork and for soaking up vinaigrette (just as a soft bun, to be fair, is convenient for sopping up creamy ranch dressing).

Come to think of it, the only thing our cafeterias have in common is that which divides us: namely the glass window after which either mashed potatoes or frites were (are) sometimes on display. I never saw a chocolate éclair beyond that window, and my son, Max, should he ever discover a square of Jell-O beyond the smudged glass, wouldn't know how to order it let alone what to do with the jiggly mass.

Speaking of dessert, it just may be one more thing my childhood has in common with my son's: that is, when the famous chef's call "Il y a du rab!" "Seconds!" came, there may have been extra frites and a surplus of patates* for the taking, but there was never any leftover dessert.