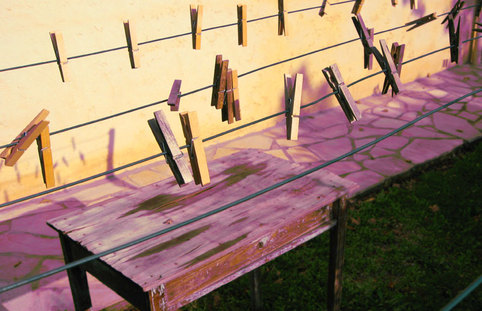 Clothespins wishing for something to hold on to.

souhaiter (sweh-tay) verb
to wish for

Tous les changements, même les plus souhaités, ont leur mélancolie.
All changes, even the most longed for, have their melancholy. --Anatole France
.

Monsieur and Madame D. walked up the stone-flanked Chemin St Claude, stole under a narrow bridge beside which poppies burst in springtime, and made the hairpin turn leading to an old mill, its wooden wheel having done one last tour* sometime in the last century. Behind the giant roue,* where water falls over a stone wall and splashes across the moss-covered slab below, droplets hit the ground where figs once fell in summertime, coloring the earth purple.

Having passed the sleeping fig tree, Monsieur and Madame took up a single lane road which leads to the thyme-scented garrigue* and its forest beyond, to a south-facing villa they might soon call home. Having reached a shallow fossé* along which wild asparagus grow and are snapped up each spring by local gourmands,* they turned right and walked along a field where a great parasol pine and an old stone cabanon* have held their ground, resistant to the restless tractors and newly laid cement blocks of the surrounding lots. There they made one last turn, walked to the end of a stone path and knocked on a door the color of which could be described as somewhere between the green of a neighboring olive grove at daybreak and the hard-to-crack shell of those heavenly almonds that grow at the top of the hill at Saignon.

"They're here!" Jackie shouted and I hurried over to my daughter, smoothed down my chemise (drying the sweat from my palms) and opened the front door to welcome our buyers. As I wished them "bienvenue"* I wished a bit, too, that I were in their shoes.


Hear French:
Listen to my son, Max, pronounce the French word for "to wish for" in this quote:
Tous les changements, même les plus souhaités, ont leur mélancolie.
Download souhaiter.wav

Race to the finish with this sleek new version of Mille Bornes, the classic auto race card game.