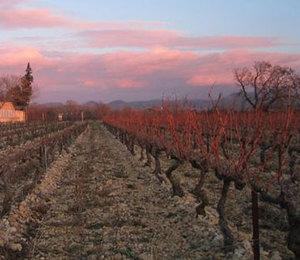 Cancelled! The Words-n-Wine event in Aix has been cancelled due to a "rupture de stock." While those words caused a bit of excitement at the time the bookshop owner spoke them ("What? My book is sold out?") an email to the publisher revealed the humble truth: many more copies exist and it looks like I am not an overnight success (just a bit delusional). That said, there is never a rupture of words here at the blog, so please enjoy today's photo and story and thank you for reading!

It is understood that any pruning that I will do in the town of Ste. Cecile des Vignes will be ceremonial. Let's be clear on one thing: I will write about the vineyard adventure, Jean-Marc will live it.

But with only two months left to prune 30,000 vines and the clock ticktocking, the big grape bubble that I am living in is about to pop: Jean-Marc will need my help out in the field, whether he admits it or not.

"You can stay in the car," my husband sympathizes, as we pull up to the property--land that still does not belong to us, but that we have permission to farm. The owner, having signed promise papers to sell us the land, is officially free of the chore.

Forget frisquet*--it is freezing cold outside, colder here in the Vaucluse than back home in the Var. The sun will set in the next hour and that will put a stop to pruning one way or another. Reassured, I put on a thick bonnet, gloves, and ask Jean-Marc to help me attach the portable electric shears. The heavy battery pack rests low on my back, held in place by thick elastic suspenders. I snap the belt shut while Jean-Marc adjusts the straps over my parka. Next, I head over to the Carignan vines for a crash course in "la taille" or pruning before I am set loose in one of seven vine parcels.

"I'll be right back," Jean-Marc says, following the man from Eco Vignes to the Grenache parcel to collect a sample of terre* for a lab analysis. On my own now, I study the electric sécateur.* I need only to depress a button for the sharp blades to snap shut. This, along with the robotic scissoring sound, terrifies me. As I watch the shears clamp down on a branch, easily slicing through its thick arm, I realize that a dainty finger would be incidental to its bite.
"Always keep one hand behind the back," Cousin Sabine cautioned me back at her farm.

"Six porteurs* per vigne," I mumble, repeating my husband's words. "Six holders per vine," holders of future grape clusters, we hope. I am to cut after the second "oeil".* Does that one count as the first "eye"? I ask myself, dropping to vine level to study a thick mass near the base of the "porteur". I still can't believe Jean-Marc trusts me with his vines. What if I am massacring them?

Before signing the promise papers for the vignoble* we had talked about spending February 14th in the Tuscan hills. Instead, Valentine's day will be spent in a blustery cold valley, Cupid's bows gliding through the air in the form of so many arrow-thin branches. "Try to pitch them in the middle of the row," Jean-Marc suggests of the felled limbs, "...if you can," he adds, so as not to push his luck. There we were, half-way down a row of vines he'd left off pruning the week before. By the top of the hour, we would barely reach the end of the row.

My fingers were now frozen around the shears. Hunched over the sleeping vines, I think about my ceremonial pruning, how it resembles a ceremony* I almost missed some twelve years back, on a hill beside the Mediterranean sea at dusk: there is the aisle of vines, like the church aisle I eventually walked down, there is that sacred hush just before the bride walks in, just before the sun disappears beyond fields of ethereal vines glowing pink beneath the setting sun, there are the jitters (here, from the freezing cold, back then from nerves), and there are the words that currently escape my mouth in a visible cloud of breath "for better or for worse." And with the setting sun, one great fiery ball melting into the horizon beyond, it couldn't get much better than this.

From Vines to Wines: The Complete Guide to Growing Grapes and Making Your Own Wine by Jeff Cox