A santon maker in Marseilles

French proverb:
Le jeu n'en vaut pas la chandelle.
The game is not worth the candle.


A DAY IN A FRENCH LIFE by Kristi Espinasse

All good things must come to an end and in Provence santons* are no exception. On February 2nd, at Candelmas* (what the French call "Chandeleur") the meticulously arranged crèche is finally taken down and the colorful santon figurines are carefully put away. That's when the party begins--for February 2nd is also known as Crêpe Day!

Regretfully, our family didn't have any hand-painted santons to store, but boy did we put away the pancakes! When Jean-Marc couldn't find his mother's crêpes recipe, he rolled up his sleeves and made the batter "au pif"*--mixing together a bunch of flour, several eggs, a drenching of milk, a dash of salt, a swirl of warmed butter and a few tears of water.

Meanwhile, I prepared the fillings tray: the salty and sugary additions that would top off the delicate crêpes. The salé* selections included gruyère, ham, tarama,* smoked salmon and hummus. As for the dessert crêpes, we had sugar for sprinkling and other sweet spreadables including fig jam, caramel sauce, chestnut purée, Nutella and Aunt Marie-Françoise's lavender honey. Missing were the whipped cream and my mother-in-law who, if she were here (instead in Marseilles preparing sarrasin* crêpes for her neighbor) would've loved a drop or two of lemon juice and a powdering of cinnamon to go with the sugar on her crêpes.

Jean-Marc had pre-cooked the crêpes for reheating at the dinner table, this, thanks to the handy dandy "crêpes party" machine (a Teflon coated unit with six mini pancake shaped warmers). Because I didn't see my husband grilling the cakes, I can't be sure if he remembered to flip the cakes with the right hand while holding a coin in the left (an old French "recipe" for prosperity (and good crops!!!).

Some say the golden, round crêpes are reminiscent of the sun and, therefore, the coming of printemps.* While our pancakes reminded me of those things, the golden disks had me thinking of back home where the Arizona desert is lit by the large chandelle* in the sky. I remembered my nieces and nephews, little southwestern marmots who were probably just coming out of a long slumber in time to celebrate Groundhog's day; up in time to enjoy my sister's homemade waffles (a sort of square shouldered, dimply-cheeked big brother to the dainty crêpe and, in my experience, all the better for hogging).

Additional references:
santon (from en.wikipedia.org): In Provence, in the South of France, nativity scenes are sometimes composed of hundreds of small painted clay figurines, called santons, representing all the traditional trades and professions of old Provence.

Candlemas (definition from Dictionary.com) : a church festival, February 2, in honor of the presentation of the infant Jesus in the Temple and the purification of the Virgin Mary: candles are blessed on this day. 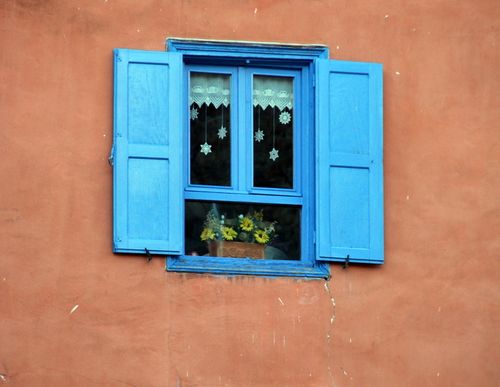