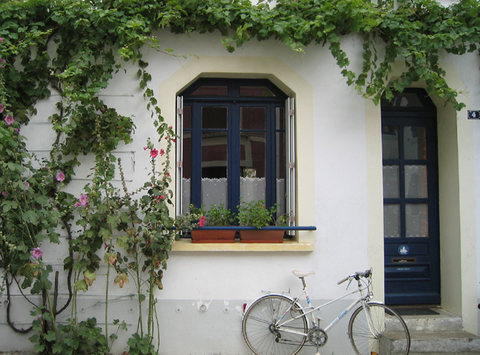 It's a rat race even for plants: French hollyhocks trying to catch up to the vines above.

Sure, point it out. "But ketchup isn't a French word!" you argue. Yahhuh it is! (Well, more of a word than yah + uh-huh or "yahhuh" which, though fun to say, isn't a word in French OR English). If you cringed reading "yahhuh," then you can just imagine how those "keepers of the French language" over at L'Académie française must have reacted when the bloody term made it into some of the most hoity toity of French dictionaries. Mr. Ketchup, for here we have a masculine noun, is positively dapper listed there under the "style" section in some dictionaries. Here are just a few examples:

I watch, stunned, as Jean-Marc picks up a bottle of ketchup and squirts a small red pool next to his riz cantonais.* The only thing French about this is its singular quality, that is, each aliment is in its place (ketchup on one side, fried rice on the other). Next, I watch my husband haul the ketchupped rice into his mouth. Beurk!*

While I watch, wide-eyed, my kids don't bat a French eye. Instead, Max seconds the motion and Jackie says "passe moi le ketchup, s'il te plaît." As Max draws the bloody mark of Zorro over his own fried rice, he brags about his neighbor friend. "At Alex's house you can eat ketchup so hot your mouth will fall off! Oui, ça arrache la bouche!"

Meanwhile, I wonder if my own ears have been arrachées, or pulled off. Am I hearing right? Since when have the tables turned so that now the French are as fond of ketchup as Americans once were?

That Americans put ketchup on all of their food is legendary (if only to the French). Wrong, wrong, wrong. Just take a look at this French definition for ketchup: condiment à base de jus de tomate utilisé dans la cuisine anglaise. Well, there you go, the French cite the English as the official ketchup
gourmands. Maybe they pour it over those meat pies? Will have to ask my friend Michele....As for me, I enjoy ketchup with my scrambled eggs. Come to think of it, there are scrambled eggs in the fried rice that we are eating....

It turns out that Jean-Marc's fried rice/ketchup pairing is right on target and not because of the egg coincidence. According to Wikipedia, ketchup first appeared in Eastern Asia. And while one dictionary says ketchup is an English word derived from Hindi, another suggests it might be a Malayan word. Will
have to ask my friend Alicia....