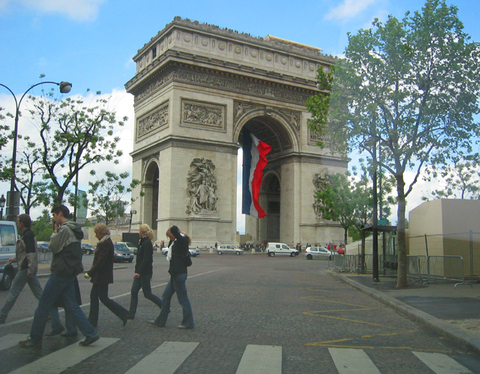 At the end of today's story, I landed here in Paris.

In addition to my writing voice, I am working on my reading voice which, I realize, is a bit formal (read: stiff as a day-old baguette). I hope to slow the voice down, relax a bit. Even so, I'm afraid I'll never talk like Nancy Sinatra (or how I imagine she might talk after walking in such carefree boots).

Les gens ne connaissent pas leur bonheur, mais celui des autres ne leur échappe pas. People do not know their own happiness, but the happiness of others does not escape them. --Pierre Daninos

I was sitting in the food court, polishing off a plate of Japanese stir-fry when another one of those invisible forks in the road appeared. The year was 1993. Toni Morrison was just awarded the Nobel Prize for literature and I hoped language was my calling, too. In the meantime, I needed a job.

There at the air-conditioned mall, a middle-aged man and a young woman sat down at the table across the way. The woman had hair the color of salsa and skin as pale as an onion. I recognized the man as the one who used to buy expensive ski clothing for the pretty blondes who decorated his arms. I sold him the Bogner ski suits and Revo sunglasses. Afterwards, I cleaned the dressing room floor. The purse-size pooches (belonging to the French-speaking blondes) made puddles and pire.*

When the man signaled "Bonjour," I threw my paper plate in the trash, set the tray on the poubelle,* and walked up to the table, my posture straighter than before. I had been to France since we last met. I had quit the ski shop, returned to college, graduated, and met a Frenchman before the upswing I was on changed its course, landing me back on the desert floor which, to a Francophile, might as well have been quicksand.

Middle-aged Marc introduced me to Frances who stopped biting her cuticles in time to shake my hand. She didn't speak French like the Bogner blondes did, but she apparently spoke the language of love. Marc asked if I was looking for work, mentioned some kind of start-up and that he needed a few more girls.
"It's telephone work," he coughed. There would be callers.

Frances shook the ice in her cup and looked away nervously. That's when I understood what kind of telephone work we were talking about: three-lettered and rhyming with "hex."

My face turned the color of Frances' hair and if I hadn't been so embarrassed I might have embarked. But phone hex wasn't in the stars for me and just then, in a sudden cosmic shift, the color from my cheeks drained onto that invisible fork in the road, highlighting the path before me in crimson. I followed the red brick road out of the mall, away from the phone hexers, through the valley of the sun and eventually ended up back in France, having ay-shapay* belle any deep-breathing clientele.

As for the cosmic gods, it is not without a sense of humor and a good heart that they sent another would-be phone hexer to the Hexagone.*

In Music & More:
"Le Femme Chocolat" by the award winning Olivia Ruiz
Maison Francaise -- decorating tips (and great pics) in this *French language* magazine
French Before You Know It Deluxe--quickly learn to understand and speak French