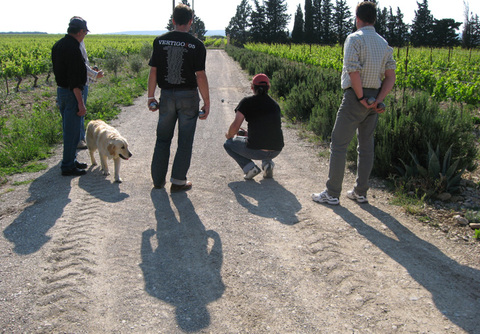 Perhaps we can know the word origin for "déballer" by studying this photo? When the French arrive at a new location, one of the first things they "unpack" are the "boules": "de-ball-er". (In the background, the vine horizon. From left to right: Andre, Braise, Jean-Marc, "Uncle Jacques" and cousin Pierre.)

In Books: "Auberge Of The Flowering Hearth" by Roy Andries De Groot. "This cookbook is a whole way of life. What care, love, and work have gone into it." -Julia Child. Read more here.

déballer (day-bal-ay) verb
to unpack
to display, to lay out (merchandise)

Chaque jour apporte ses cadeaux. Il ne vous reste qu'à les déballer.
Each day brings with it its gifts. All you have to do is unwrap them.
--Ann Ruth Schabacker
.

Well, we made it!

...To a new department, a new town, and a new occupation (apart from wine and writing): le déballage.* While there may be an art to unpacking, Necessity is no poet and one mustn't wait for inspiration to strike from the French heavens when six hungry campers are crying to be fed.

(Now, where did I pack the nonstick spatula? And why don't those leaning box towers in the makeshift kitchen list contents other than "cuisine"* or "cuisine - fragile" or "cuisine - verres"*?)

I proceed by deduction (the nonstick spatula is not in the box marked "verres" or "fragile") and go digging through the other cartons only to give up and use a metal spoon on my favorite nonstick pan.)

"Everybody to the table!" I shout, advancing sideways along the obstacle course that is our front yard, ignoring the piles of taped boxes, stacked chairs, orphaned shoes, and general chaos all around. There is even an uprooted toilet (which the demolition workers salvaged) with a pink plastic seat should our dining experience lack ambiance.

I make my way over to the picnic table where my brother-in-law, Jacques, and the roofer, Michel (two temporary boarders during the renovation stage of this project) are rubbing their hands together as if trying to keep warm when they're really just hungry. I hope they will like fajitas (the menu was decided when I realized that all those carefully kept tortillas, frozen in the freezer, would thaw out during the move north).

As I spoon boeuf aux olives* and emmenthal cheese (French substitutes) into a flour jacket, I explain to Michel-the-roofer the difference between a Mexican tortilla and a French crêpe so that he doesn't go jumping to conclusions (namely, that a tortilla is a failed crêpe...). If the French aren't keen on Tex-Mex, part of it has to do with this floury detail.

According to my calculation, Michel, who burns calories faster than I can burn bread, should be able to put away several fajitas. So why is he pushing the food back and forth on his paper plate? Michel, as if hearing my thoughts, answers with a blush. "I have an appetite like a petit oiseau*..." he apologizes.

I look the other way when Michel fills up on French fries (another perishable that got unthawed during the move), for who can blame a Frenchman for making room for fries?

I'd best leave the culinary arts on the back burner for the moment. With dinner behind me, I now have time to practice the gentle art of unpacking. And somewhere, I trust, deep down in one of those boxes (beneath the nonstick spatula?) is a good cookbook.