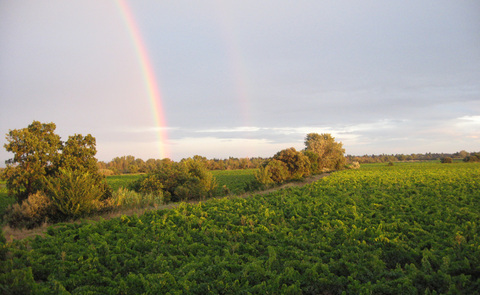 picoter (peeko-tay) verb
: to tingle, to tickle, to smart, sting
.

A DAY IN A FRENCH LIFE
Set out to renovate a house with your nervy counterpart while living "on site" and sooner or later sparks will fly. Add outer tension to the internal kind and you've got yourself a mouthwatering recipe for one electrifying pie--so mouthwatering, so electric that you might just spit fire! But first you need a preheated oven in which to bake that pie...

"Don't touch the stove!" Jean-Marc shrieks. Was it me or was he being a little touchy when he said that?

I set down the casserole of milk--forget café "au lait"* (and pie, for that matter. It was only a metaphorical pie anyway). I reach for a vacuum-packed coffee capsule, which I've stored with the others in an old glass candy jar above a miniature armoire. While unscrewing the jar's bakelite lid, I receive another admonition.
"Don't touch the cafetière!"* Jean-Marc barks. "And stay away from the bread machine!" he snaps.

Touchy, touchy, touchy! We've both been a little on edge here at the chantier* but not to the point of putting claims on household items (as in "I'll take the cafetière. You can have the aspirateur"*).

When I hear what can only be described as a French yelp, I look over at Jean-Marc who is poking the bread machine with the tip of his index finger: poke, poke, poke. His forward-backward dancing, which accompanies his poking motion, reminds me of fencing only instead of declaring "Touché!" he yelps once again.

Well, he got zapped, something that befalls him often enough. Some are prone to mosquito bites, others are prone to electric shocks (my husband is prone to both).

I unwrap the coffee capsule.
"Don't touch the coffee machine!" Jean-Marc insists. Only now I realize he isn't being touchy, but FEELY. He's just been zapped again!

I touch the coffee machine anyway, braving one jolt for another. Coffee is needed in order to face our "courant"* problem. Lately, every time we touch an appliance we get zapped. The electric shocks range from little zzzt zzzt picotements* to high voltage volumizers which leave our hair standing on end.

I sip bitter black coffee while Jean-Marc continues to check the appliances, taking note of which ones are emitting "jus" as he calls it. I myself have received a few zaps and a few volumizers, but nothing like the châtaigne* that Jean-Marc just got from the bread machine.
"AIEEEE!" He shrieks, this time clapping his hand over his heart.

Big-hearted Patrick, our steel-haired electrician with the ponytail, has left his Sunday dinner to make an emergency call at our place. With a hand-held device, he checks our appliances and visits the electrical outlets throughout our house.

"Effectivement..."* he says, mumbling something about the parafoudre,* something about "masse"* and something about "terre".* Apparently a surge protector had been "grilled"--overworked and now defective--after all of its sockets were taken up by high powered masonry machines (drills, electric saws...). This, combined with the recent weather--in particular the sky-whitening foudre* we had recently--had made for one fantastic fuite de courant.* The excess, Patrick explained, was being sent back to the ground or "terre" where we were, horror of horrors, picking it back up as human circuit conductors. Patrick unplugged the faulty unit and the problem was solved.

Reading up on electricity, my face is as white as the electric sky was the other night. While the idea of renovating a historic farmhouse may be charming to some, the reality can be "positively" chilling.