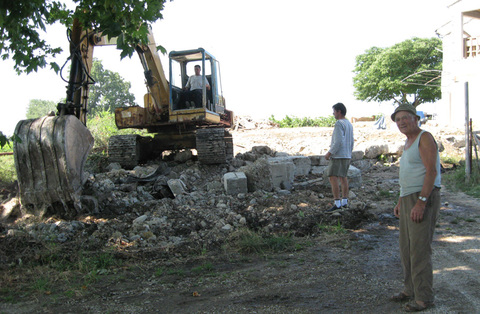 How to spread out, or "étaler" a bulldozed building...with grace and artistry in today's story.

étaler (ay-tal-ay) verb
to spread, to spread out, to display, to lay out
to put on, smooth on
to spread out (payments)
to parade, to flaunt, to show off

Ne ronge pas ton frein, ce que tu as sur le coeur, dis-le. Tu verras qu'un secret étalé au soleil rétrécit à vue d'oeil. Don't chomp at the bit, whatever is on your heart, say it. You will see that a secret, once spread out under the sun, will shrink before the eye. --Yves Thériault
.

"I should get him something to drink," I say.
"No, leave him," Jean-Marc insists.
I drop my hand, an ever ready sun visor, and look at my watch: Nine thirty-five. The "thirsty man" has been working, non-stop, for three hours.

Across the jagged ground, I spot Monsieur Delhome who has left his vegetable patch to watch the noisy spectacle.* Monsieur has had an eyeful since we began the tearing down and building up of this farmhouse. There was the roofer, sacré* Michel, whose uniform was no more than an itsy bitsy Speedo. "Il a fait du bon travail!" He did a great job! Monsieur tells me. I suppose Michel was quick on his feet without all that cloth to get in the way. Surely he had safety in mind (and sun-kissed skin). With a two-in-one goal, and twinkle toes, Michel had a section of our roof tiled in under 10 days and for a third of the price quoted by the big guys.

As to those "big guys," Monsieur Delhome has his opinions about les entreprises de maçonnerie* or sociétés sans Speedos: "They'll rob you!" But the independent masons (like Michel and the "thirsty man" whom we are watching) are true craftsmen who won't empty your pocket.

Monsieur and I study the thirsty man, with Monsieur offering an ongoing commentaire* about the beauty of his work.
"Just watch him!" Monsieur says, in awe.
I watch as the pelleteuse* scoops up another load of broken concrete and, thanks to its operator, deftly spreads it out across the yard. For the big chunks of concrete, the shovel is turned on its belly to crush the béton* to smithereens.

"What grace!" Monsieur Delhome observes.
"Yes, but... he must be thirsty..."
"He won't stop now. He's on a roll. Just look at him!"
I do as my neighbor instructs me to, and appreciate the elegance in one man's efforts. But it is Monsieur Delhome who truly understands the talent behind the tapering out of concrete piles.
"C'est un artiste!" he declares.

The artist's paintbrush is a twenty-two ton pelleteuse. His canvas is the stretch of uneven earth to the side of our farmhouse. Where once piles of concrete were stored (after the demolition of part of the farmhouse) now a creek rolls gently by, no longer hidden by a wall of rubble.

With Monsieur Delhome's nine decades of experience, and in his sharing, I can now see the artist behind the engine. I pause to consider the art appreciator standing beside me who seems to share an artist's sensibility: both require vision and the ability to see beauty in what some consider banal.

In keeping with our Etalable!/French favorites theme: Mustella 2 in 1 Hair and Body Wash - Soap-free cleansing.

...and how about a bed "spread": Beautiful French all over quilted floral quilt with matching shams

More about handmade quilts, or "boutis", here: Quilts of Provence: The Art and Craft of French Quiltmaking by Kathryn Berenson