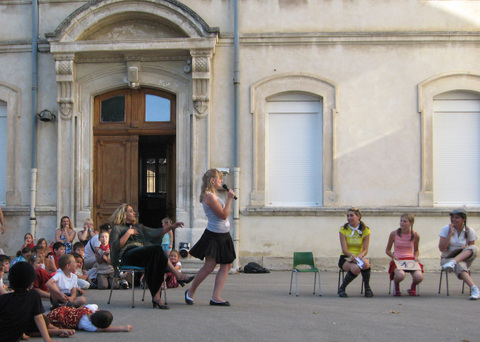 Our summer camp director (seated in chair, far left) sassy in the role of Dalida

There is a spiritual dimension in every relationship. When two people come together, it is because the spirit wanted it that way. --African proverb
.

I arrived to pick up my daughter at summer day camp where the director greeted me with a cheery "Hello!" After her warm English greeting and a bit of shoot-the-breeze papotage,* she pointed to my daughter's necklace with its cross pendant.

"Are you Protestant?" she inquired.

Here we went again with The Religious Affiliation Question. I'd gone over this before with the Catholic priest during premarital counseling.* If it was difficult to describe my spiritual orientation then, I must confess that, thirteen years later, I still haven't quite pinned it down.

"No, I'm not Protestant," I began.
"Catholic?" the director guessed.
"No, not really," I answered, regretfully, for if I were Catholic I would have "l'embarras du choix" or quite a selection of churches to go to given the number of églises catholiques* in France.
"But your children were baptized?"
Oh, dear! This is where things get complicated...
"Er, yes... in the Catholic church."
The director looked as confused as I felt.

"I'm not Methodist," I continued, by deduction. Perhaps Baptist? Was I Baptist after all? "Baptiste" is a popular French prénom* that signifies "plonger dans l'eau."* I myself was immersed in water, there in a desert church (on Central Avenue, to be exact) and not far from Katz Delicatessen where I would, years
later, nurse a bowl of matzo ball soup and wonder about how to convert to Judaism. My boyfriend, Howard, had explained to me that, should we marry and have children, our family would observe certain rituals. Words like "brit milah" and "bar mitzvah" were as foreign to me as the French language which,
unbeknownst to me, was just around destiny's corner...

"I am Muslim," The director offered encouragingly. Catapulted back to the present moment, I looked over at my daughter's cross and realized how differently life has turned out. No more visits to Katz's deli. I had lost my best friend when my relationship with Howard ended. But, just as it wasn't religion that separated us, I sensed that the same was true for the Muslim director and me.

I know little about the Muslim religion and when I admitted as much, the director's warm response included an invitation to a congrès* where villagers of all faiths come together in the spirit of breaking down barriers.

As I contemplate my religion, the vision of white robes swaying, hands clapping, and feet dancing takes me away... to Dorothy Love Coates & the Original Gospel Harmonettes...and to The Soul Stirrers and their thumb snapping tune "Jesus Hits Like The Atom Bomb." Tunes like "Oh Happy Day!" and Jimmy Cliff's "Many Rivers to Cross" speak to me like no denomination can. "Amazing Grace," whether sung by Judy Collins or Ani Difranco, moves me like ministry.

I still hadn't answered the director's question. The time had come. I looked into her searching eyes with my own and, for the first time, understood the uncommon denomination that best described my faith: not Methodist or Mormon, not Born Again or Buddhist, not Catholic or Confucian.

"Do you know music?" I asked. "You know, 'le goh-spell'*..."
"Oui," the director said in anticipation.
I cleared my throat and my conscience at once when the following words tumbled out:

The director looked at me with compassion in her eyes. We were no longer American, French, or North African, no longer Muslim or Christian. We were soul sisters.