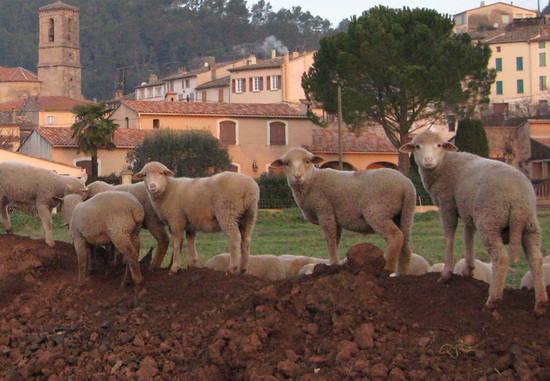 Freshly turned earth feels so good under the hoofs.

"Tune Up Your French" by Natalie Schorr. "If you are among the many people who studied French in high school, college, or even beyond but still get stuck when it comes to actually speaking the language, this book is for you." (Publisher's note).

Our ever-joyful mason, Michel, is back. You may remember him for his talent in scaling French walls, tiles under arm: he is French Speederman* minus all that suffocating spandex (a Speedo will suffice).

Now that Michel has tiled the roof, he will tackle terre cuite.* Hundreds of rectangular terracotta pavers (parfeuille) were discovered by our contractor who carefully pried them from beneath wooden floorboards and set them aside--but not before pointing out the date of fabrication: 1696.

Michel and I are standing next to the stacks of ancient tiles. I have an idea (make that a conviction) about how the tiles should be placed: vertically and not horizontally. That is, when someone is standing at the front door, about to step in, the tiles should be vertical, like the long open road before the soul-searching driver. We don't want horizontal crossroads. Tiles, placed in this forward fashion, give the illusion of continuity. Place them horizontally and the eye will catch on a constrictive pattern.

I share my conviction with Michel, who simply smiles and smoothes out the air before him, in a horizontal pattern. "Let's go and see," I say to Michel, hell-bent on setting the matter straight. Vertically straight.

Michel pauses to collect an armful of tiles and we head over to the new entrance. I am still lecturing as we arrive at the front door; only, my convictions seem to float painlessly above Michel's head.

Michel begins placing the armful of tiles across the cement floor. Every once in a while, mouth still running, I look down. Michel quietly takes up the tiles and then places them vertically. Like a baker kneading dough, the direction of his hands (and the tiles) changes, his goal being to stretch my imagination.

Once again Michel places the tiles vertically, then horizontally. Back and forth the tiles go until my mind begins to shift; with it, my mouth ceases to motor.

Dumbstruck, I study the current (vertical) placement and notice how the eye is carried off, as if by a rushing current. The pattern is drowned out completely. It is now clear to see that the eye needs something to behold... a horizon!

Eureka! The discovery comes to me as if by my own efforts (I suspect our monokinied mason intended it that way). As for Michel, he has remained persuasively silent throughout my conversion, reminding me that "Les actes parlent mieux que les mots".*