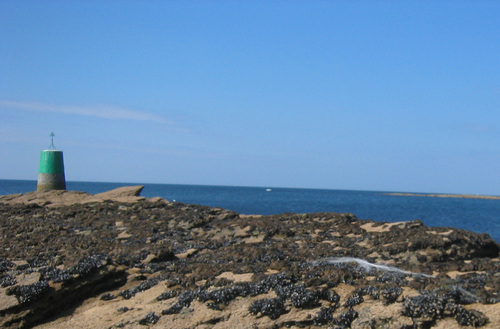 vaincre (vehn-kr) verb
1. to defeat, to beat, to vanquish
2. to overcome; to conquer

A stranger camped out in our driveway over the weekend. I had offered him the couch, but Jean-Marc insisted that the man, who went by "Vincent,"* would be fine in the fourgon.* Jean-Marc's brother, Jacques, who has been sleeping on the living room floor since June (when not putting up walls in our home), seconded that. "He has all he needs," my brother-in-law assured me, of the moonlighter who had agreed to plaster our walls.

Vincent, I learn, works non-stop, seven days a week. At night, he passes out in his van, the metal floor of which is as soft as a feather mattress when you're dead tired. Jacques says that Vincent is highly in demand being the best plasterer west of Saint Tropez (where the two met on a construction site. My brother-in-law was in charge of putting up plasterboard).

*   *   *
On Saturday morning I looked out the kitchen window and noticed a sheet of gold covering the field of vines beyond. The sun was up and, it appeared, so was Vincent. I watched him fiddle with the garden hose. "Il fait sa toilette," he is grooming, my brother-in-law explained. Hadn't anyone told our poor guest that he was welcome to use the indoor shower?

"He isn't a guest," Jean-Marc corrected, putting the matter straight, adding that I was not to worry about meals, either. The previous night, while stirring a pot of plain pasta, I had wished for something more to offer our non-guest. But after weeks of juggling menus and feeding live-in laborers lunch and dinner, I was out of ideas and food.

Back at the kitchen window, or rather--hidden behind a corner of it, I looked out to the front yard. There, beneath the mulberry tree, I noticed a plastic bucket full of water. Shirtless, with a rag and a scrap of soap, the moonlighter washed his face, running the cloth across his neck to work out any kinks that a corrugated metal floor might put there after a long night. He scrubbed any traces of plaster from his cuticles. "It gets into everything!" he had said the night before. That's when I had noticed his droopy eyes, the bags beneath them added years to his would-be youthful visage:* still, he couldn't be more than thirty-five years old.

"Le pauvre!* He works too hard and he doesn't have much!" I had noticed a sack of sliced bread on the front seat of his van. That must have been his breakfast! I finished making the coffee and went to get the sucrier* only to learn that we were out of sugar cubes.

*     *     *
It's Monday morning now and I am making another pot of coffee. I smile into the sugar bowl, which is no longer empty thanks to an unlikely "loaner" who has since moved on. I pick out the plaster among the sweet crystals and think about "le pauvre". I had thought he didn't have much; in the end it was I who was lacking.