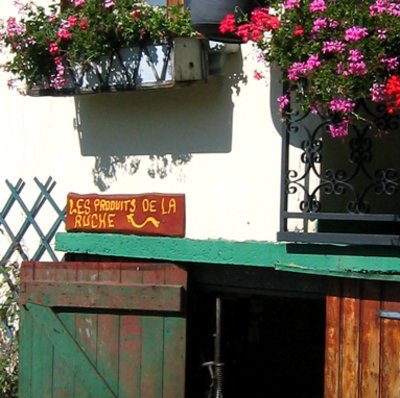 The sign says "Products from the beehive". Picture taken in Serre Chevalier.

Thank heavens the vines are abuzz once again! And, no, it isn't the grape pickers that are causing so much commotion--but the honey harvesters. That's right--the bees are back!

When the "girls" jumped ship two months ago, leaving their hive as hollow as a hull, I gave Jean-Marc a verbal thump on the side of the head. "Qu'est-ce qui s'est passé?!"* I cried from the other end of the telephone line.* Jean-Marc wasn't sure what happened, but I had a hunch:

Juggling happened. Newly acquired vines (and the tending of them), renovation, moving homes, bees... too many ballons* in the air and one fell. Make that *flew* for everyone knows that bees don't jump ship.

But beekeepers do, or can, or can do if they don't get their act together! No use getting mad, besides--every jongleur* deserves a second chance...

And so it was that, still smarting from that thump, or verbal "bee bop" alongside the head, my jongleur/husband raced right out, empty beehive in hand, and found his queen another colony--this, after much negotiation at the bee brokers (or would-bee brokers. The bee boutique in question doesn't officially sell bees but, faced with one head-thumped and hiveless husband, they quickly changed their pollinator policy.)

The bee homecoming (new bees, old home) was grand and included all the pomp and circumstance of a Provençal parade. (The "pomp" being Jean-Marc's Gallic march down to the blackberry capped creek....followed by an ear-shattering scream I heard out in the field...

...the "circumstance" being a footloose vine and one fallen Frenchman, the latter having tripped over the former, beehive in hands and 60,000 "girls" strong...

Meanwhile, clueless from the balcony and admiring the full moon above, the shriek caused my eye to wander from the moon and catch on an erratic movement below. Next, I saw a streak across the horizon and could have sworn it was a shooting star disguised in a bee suit. Those silly stars.

Post note: our "juggler" succeeded in placing the beehive on its stone platform beside the creek, beneath the shimmer of stars above. But he's up to his old tricks again, with yet another ball in the air (French Wine Label Design). Check out his progress in the "Vineyard Update" at the end of this edition.

=> Dont miss "A Book of Bees: And How to Keep Them"
=> Langstroth's Hive and the Honey-Bee: The Classic Beekeeper's Manual