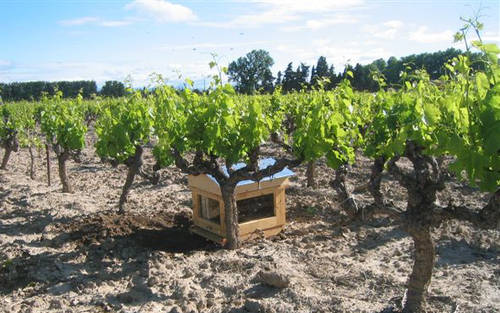 Couldn't get a photo of our rock star harvesters as they would like to remain unseen. Here are some rock star bees for you. Looks like they'd rather go incognito like the others...

"Did you see how they dress, Mom?"
My mom scrapes a board of just-diced onions into an enamel bowl.
"They're pretty cool, aren't they? Dressing like that to pick grapes!"

Our grape harvesters wear black bikini tops, have long, bare midriffs and stylish rock star pants. Where do they get pants like that? we wonder.

"I sew," one of the rock stars tells me. She's got uneven pigtails and looks like a modern day Pippi Longstocking gone punk. To look at her is to dream about a parallel life. What if... at that fork in the road... instead of stepping on board Air France flight 8919... I'd stolen into the back of Zoé's van and never looked back?

Zoé was the first girl I ever knew with a ring in her nose and a ridge on the crown of her shaved head. We were living in the boondocks of Carefree, Arizona--she, in the basement of her parents' desert casa, and me in a rental on Never Mind Trail. The town really was called "Carefree" and the street, "Never Mind": the town and street names being the most original facts of my life at the time. But Zoé was original and, at 15, she sought just enough anti-conformism to still be able to collect her allowance. Together, we craved the artful, the original and the aromatic (Zoé smoked cloves; I inhaled the air
around her).

Zoé's plan was to lose her parents' basement and get herself a van. In the meantime she listened to The Smiths, "cloved" with her pasty-faced copains,* and kept the rims and the rest of her eyes kohl-lined. I tagged along to watch The Rocky Horror Picture Show. That's about as rock and picturesque as 1983 ever got for me.

Last time I saw Zoé, she was cocktailing poolside at the Hyatt at Gainey Ranch. She had an adored four-year-old son instead of that cross country camion* for which she had been saving her allowance. Without the Mohawk and ring through her nose I hardly recognized her. It was that helium laugh that gave her away. She always sounded as if she had just inhaled the breath out of a party balloon. Indeed, she sounded breathless. It must have been the very absence of oxygen that made her seem otherworldly to me. Looking back, I realize she was my ticket to another time and place--back when awkward adolescence was nothing but a slap in the face.

As for me, I got on that Air France flight back in 89' to find myself.  Make that "to find myself cooking" ... for these rock star harvesters who have rings in their noses and grown-out Mohawks like Zoé's, last time I saw her. We never did hit the road together, Zoé et moi, but took another embranchement.* How different this French chemin* is from Route 66.

Back to our rock star grape harvesters: seventeen mouths to feed today... time to come up with enough grub for a small audience (or, as Zoé would prefer, a mosh pit).

In French music: "the anticonformist artist" Alain Bashung
Spotted in France: A Dog's Life...On the Road


More in Shopping:
Cote Sud magazine (in French): "A superbly illustrated decoration magazine about the art of living a sumptuous life in the South of France."
French vine therapy for sensitive skin: Caudalie Gentle Cleanser
Emile Henry's Flame Top Tagine: perfect for brazing, heat conduction and for slow, natural cooking
"Tune Up Your French"--includes tips on how to avoid taboos and common faux pas and is "the next best thing to a year abroad"