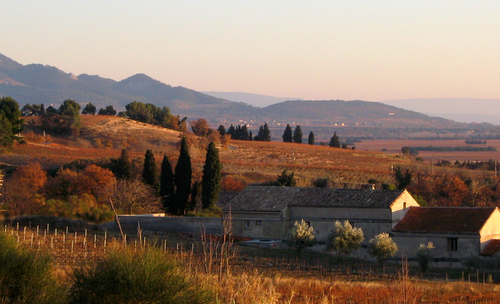 Mistletoe in them thar hills! The Vauclusian countryside.

The respect that the ancient Gauls had for mistletoe and particularly that which grew on the oak tree, is known the world over.
--from the "Dictionnaire provençal-français" by S. J. Honnorat

On a Sunday afternoon balade,* we (Jean-Marc, an aunt, two uncles, the kids and I) stepped outside and into a bit of kissy kissy history.

While the undulating hills surrounding the town of Cairanne resemble a famous Italian countryside, Tuscan they're not. This is the land of the Vaucan -- or rather "voconce". Here in the Vaucluse, over these pine-scented hills and across the red sea of vines below, a certain group of Gallic tribesman once puttered and maybe even puckered up....

As we stepped off the thyme-scented path to catch our breath, the men in our party took a moment to free an ailing tree. The oak's trunk was riddled with ivy until Uncle Jean-Claude and Jacques went to work, liberating its limbs.

As the men pulled down the ivy, freeing the frail tree, Aunt Marie-Françoise pointed to something high up on a branch. Next, she began talking about druids, potions and parasites! Her French words fashioned images in my head, of white-haired wizards and Gallic magicians intent on finding a potion for... parasites?

Lost in language and a very surreal tale, I tried to understand the foreign words, one of which returned again and again as if to illustrate Aunt Marie-Françoise's point. Gui... gui... gui... she repeated, pointing to the oak's branch. Gui... gui...gui...

That is when--poof!--a giddy Gallic ghost appeared in time to whisper a clue. This is what the ancient Gaul said to me (a bit shy and stuttering was he): "Gui...gui...gui... GUI-ME a kiss?!"

Kiss? Ah...mistletoe! I refused the bise* (what with, you know, Jean-Marc in tow!) but thanked the French phantom for the clue. As for the French word for mistletoe, who knew?

I observed the "parasite," its translucent white globes the size of cocktail onions. I'd never seen Gaulois* mistletoe before but can tell you that the Gallic version is grander than the store-bought stuff. Like mistletoe on Miracle-Grow!

Still, I'm not sure what druids, potions and parasites have to do with all this. And the question remains, should I have accepted? Should I have puckered up and given that Gallic ghost a kiss?

Post note: With a better understanding of language, specifically its building blocks, I might have been able to piece together the meaning of druid and how these ancient Celtic priests might be called "they who know the oak". Here now from the Online Etymology Dictionary (etymonline.com):

More on the Druids, those "knowers of oak" from Wikipedia.org:
"The Druids were polytheists, but also revered elements of nature...such as the sun, the moon, and the stars, looking to them for "signs and seasons". They also venerated other natural elements, such as the oak, certain groves of trees, tops of hills, streams, lakes and certain other plants, especially mistletoe [GUI] and holly.

More on mistletoe ... druids and cures... at the end of this letter!

"The Druids considered the mistletoe to be a sacred plant and believed it had miraculous properties which could cure illnesses, serve as an antidote against poisons, ensure fertility and protect against the ill effects of witchcraft. Moreover, whenever enemies met under the mistletoe in the forest, they had to lay down their arms and observe a truce until the next day." --from www.culture.gouv.fr