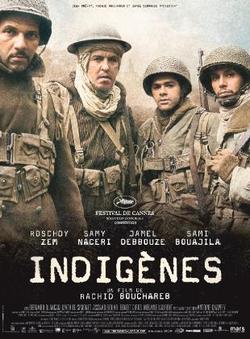 The sharpshooters of the French African army contributed, by their bravery, to putting France among the victorious powers of 1945. --from the book "Paroles d'indigènes Les Soldats oubliés de la Seconde Guerre mondiale"

The upside about those glaring plasterboard walls, here in our unfinished farmhouse, is their potential for bringing the "big screen" home (this, with the help of a laptop and a projector). The downside about home cinema is getting four Franco-American film critics to unite. (Jean-Marc likes historicals, I like drama, and the kids like Jamel Debbouze [read: comedy]). Recently, our tastes teamed up in the tear-jerker "Indigènes,"* a film about the forgotten North African soldiers of WWII.

Eight-eyes glued to the plasterboard screen, we witnessed the power of hope amidst prejudice and unreward as the "indigenous" soldiers (aka the Algerian Infantry Division) arrived in France from the colonies to help free their "motherland". The following, from OpenDemocracy.net summarizes the film's subject matter:

In 1944, the French army had 550,000 soldiers, more than half coming from the "empire": 134,000 Algerians, 73,000 Moroccans, 26,000 Tunisians, and 92,000 sub-Saharan Africans... They were also too often used as cannon-fodder, second-class soldiers: fed more poorly, clothed more shabbily, paid less, rewarded rarely, promoted hardly, humiliated routinely. [The film] Indigènes reminds us of all this.


If one can marry comedy with tragedy, then actor Jamel Debbouze offered just the featherlight sweep needed to lighten four heavy hearts who, turning from the plasterboard "big screen," paused now and again to ask ourselves, Why?

Post note: In 1959, during decolonization, pensions for the North African soldiers were frozen. In 2006, after viewing the film "Indigènes," President Jacques Chirac acknowledged the money owed and reinstated pensions. In view of the almost fifty year time lapse, many veterans were not able to collect as they had since passed on.

Les Indigènes: a film by Rachid Bouchareb. See this film in French with English subtitles

In Gifts:
Henri Cartier-Bresson 2008 Calendar
"Quiet Corners of Paris" for More than eighty of the loveliest, most tranquil, and sometimes hidden places in Paris are celebrated in this charming guidebook
Vine therapy by Caudalie
Evian Travel Trio: Pure natural Evian mineral water propelled by nitrogen.

Many thanks to readers for submitting these WWII book recommendations:

3. And There Was Light: Autobiography of Jacques Lusseyran, Blind Hero of the French Resistance