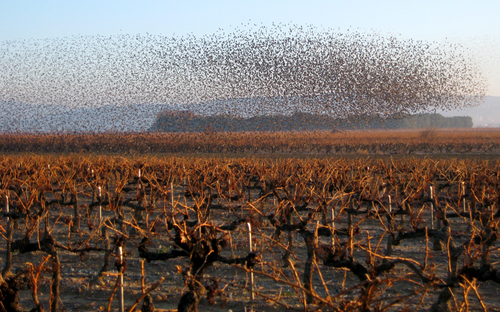 Stumbling over the vines... a swarm of soûlards or drunks. Read on...

: starling, star (bird)
: scatterbrain, featherbrain, birdbrain (you get the picture)

In books: "The Boy Who Drew Birds." John James Audubon, who was born and raised in France, was sent to America at age 18 to avoid service in Napoleon's army... Read on, here.
.

Imagine a vintner's field in wintertime. Row upon row of dark, leafless vines... trunks over which a spray of rust-colored limbs (or so the morning light, reflecting across the unpruned field, would have us think). Now imagine that woody, glowing champ* disintegrating from the "waist" up (this, before your
very eyes)! Watch as the vines seem to lose their combined "heads," if not their minds!

Les étourneaux...
They are called "scatterbrains," tout simplement.* Not the vines, which appear to be losing their heads, but the birds who've alighted, eaten, and are now, once again "altitude bound" -- by the thousands! The visual effect of so many migrators "unmoored" is, if not stunning, sobering.... to the birds at least.

For while the birds themselves aren't scatterbrains, they sometimes act that way after feasting on the fermented fruit which, this time of year, might as well be grape-size "shots" considering the alcohol inside those wrinkled raisins.*

Now this would explain the odd swerving flight pattern that some exhibit--those birds that can't seem to hold a feathered finger to beak while "walking" a straight line (for starlings are known to walk and not hop). Like that, they commonly flunk French breathalizer tests before jamming jail cells from Lille to Paris, all the way down to Marseilles.

A former fêtarde* myself (and still a bit featherbrained from it) I shake my head and cluck my tongue on hearing those birds, beaks-a-begging, try to get out of jail time by pleading with the French cops, swearing that they are merely scatterbrained and not at all soûlard!*

Update: One of our birds seems to have landed on my friend Ann's Paris bistro table. Can you see its bloodshot eyes and that telling grenache-stained grin?

Stocking stuffers and more for your Francophile: