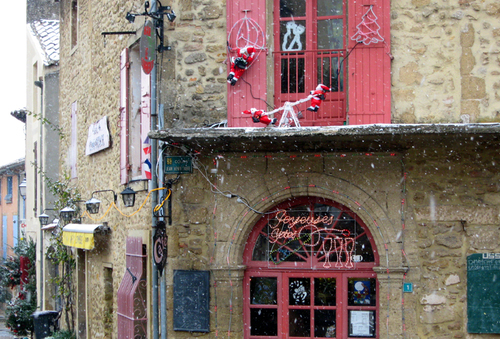 In the town of Sérignan (Vaucluse)

Chocolate cake. It is one of the things that springs to mind when I think of my belle-mère. I see her cautiously stepping off the train. In her right hand there is a plastic Monoprix sac; in her left, a small overnight bag.

"Attention!" she warns, as I reach for her sacoches. "Le gâteau..." she says, indicating her bag. Knowing her, she's wrapped that cake with a few rounds of aluminum foil before balancing it on top of the few personal items in her carry-on. In the shopping bag she's got the latest editions of Voici and Elle, magazines which she'll hand down to me when she returns to Marseilles after her weekend stay. She's in good form when she's reading gossip and looking at the fashion magazines, and when she's baking cake.

As for the chocolate cake, she's not sure if it will be any good. She's still building back her confidence after quitting cake completely, or the baking of cakes, I should say. At one point in her life, making chocolate cake was akin to climbing Kilimanjaro: a seemingly impossible feat. That period, which
Jean-Marc respectfully refers to as "her tired moment" was, truly, dark as the chocolate in her famous gâteau and minus a merciful dose of sweetness.

Around that time we were organizing a joint baptism/birthday party for our daughter (her older brother, by 2.4 years, was about to turn three). The food was to be catered... except for the dessert. Jean-Marc planned to ask his mom to make her chocolate cake.

Given my belle-mère's "fatigue," this seemed a cruel request. "Are you sure we can't order the cakes from one of the dozens of bakers in the area?" I asked. "Ne t'inquiètes pas, chérie," Don't worry, Jean-Marc assured me. It would make his mother happy to make the cakes.

When Michèle-France learned that her son had "ordered" from her three chocolate cakes--THREE!--she all but fled under her unmade bed. She had no proper cake pans, for one. For two, three, and four, well, let's just say that there began a scramble--a veritable scurry--to get the cakes together in one blues-busting hurry!

One week later the cakes made it across the French countryside, to the vineyard in Trets-en-Provence where the festivities had already begun. Jean-Marc greeted his mother, helping her out of my brother-in-law's car, and paused to inspect the cakes. Their undulating chocolate surface only hinted at the transformative effort involved.

Later, I noticed Jean-Marc inquiring about the dessert, asking his friends if they had enjoyed his mother's very special cake. With each friend's affirmative nod, I followed my husband's eyes over to his mother's and watched as he added an encouraging wink. I searched my mother-in-law's face which seemed to lift; where once numbness and shadows had gripped, there was now a noticeable shift.

A soft light, like the glowing embers of a fire after midnight, took flight, there behind the once pained regard of a woman whose eyes now reflected her son's delight.