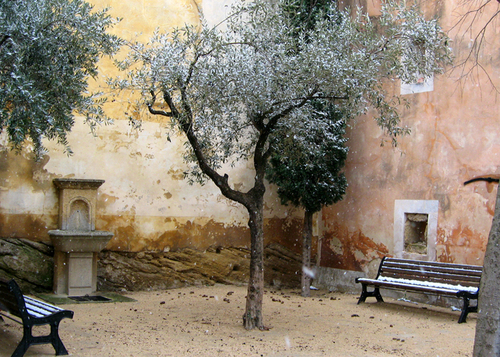 cul sec! (kew sek)
bottoms up! down the hatch! cheers!

The expression refers to leaving the bottom of a glass (cul) dry (sec), having emptied its contents. The French definition is "Boire un verre d'une seule traite." "To drink a glassful in one gulp".

Fifty kilometers north of Avignon, in the toasting, teetering town of Tulette, there is a little watering hole disguised as a proper buvette.* Chouette!*

There, at a table by the window, two expat-strangers conversed in a formal style called "get-to-know".

With set faces and serious eyes, the women -- stiff and secure behind their fruity Mai Tais (OK, the drink part's a lie*) ...

...were about to unwittingly zap that suffocating "small talk" trap...
When in walked a drunkard who all but sat in their laps.

In slavering French, with a thirst that vodka couldn't quench, our slurry seatmate began to relate...

...babbling on in a futuristic French tense, in a language so evolved that it made little sense.

"Cul sec!"* said he, raising his glass.
"Cul sec!" he sang. "Cul sec!" he sneezed.
Meanwhile his timid tablemates shared knowing glances, mouthing doubts about "was the guy tipsy?"
"Cul sec!" slurred he in what was possibly repartee.

It was thanks to this French equation (for all the man wanted, in the end, was a "cul sec!" translation) that the women, once straight-faced strangers and stiff, became fast friends in a language jiff.

Seated across from me, and Mr. Tipsy, was the writer who recently reviewed my book.

In books/France: The Diving Bell and the Butterfly:
"This heartbreaking story by a uniquely gifted writer is about transforming pain into creativity, human despair into literary miracle." -- Elie Wiesel

A Message from Kristi on this blog's 19th anniversary
Thank you for reading this language journal. Ongoing support from readers like you helps keep this site ad-free and allows me to focus on writing. My wish is to continue creating posts that are educational, insightful, and heart-warming. If my work has touched you in any way, please consider supporting it via a blog donation of any amount.