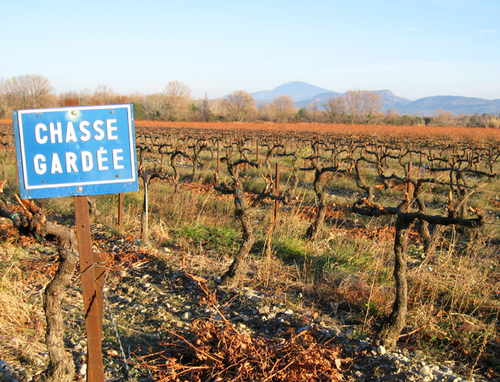 New: Add a "slice" of French life to your own blog, website, or desktop -- check out this gadget.

"Donné," from the verb "donner" (to give), means many things, including "given". Here is an example and proverb:

Tout ce qui n'est pas donné est perdu.
All that is not given is lost.

*     *     *
In books: French Demystified: Simple enough for a beginner, challenging enough for a more advanced student.
.

Our Grenache grapevines, those that slump like old men and nag like old women, just received a spa bath that only aching vines can rave about. While some prefer mud and pay the price, our grapevines go gaga over ground "garbage" -- compost, that is. Like spa mud, organic compost can be costly... especially when you have a klepto in the countryside.

In one towering heap, Jean-Marc had the vine-rejuvenating organic "restes"* delivered last week. Soon after, fate struck, this time in the form of a broken-down tractor. In the days it took to fix the engine, Jean-Marc noticed that the pile of compost was diminishing... As the dent in the pile grew, so did my
husband's angoisse.*

Driving by the vine fields, in search of answers, Jean-Marc noticed an old camionnette* parked alongside the Grenache vines. When next he spotted a paysan* busy with a few buckets, he believed he had found the compost culprit.

Jean-Marc watched as the man, freezing to a standstill before dropping the heavy buckets, gave himself away.

"Bonjour, Monsieur," the man said, stepping in front of the seaux* so as to conceal the compost. "I was just scraping together some of the, uh--fallen bits--of, er, compost," he added, sheepishly.

Jean-Marc studied the dent in the compost pile. "That's a lot of 'fallen bits'," he pointed out. "How many bucketfuls of compost have you 'scraped together'?" Jean-Marc asked.
"Only two," the man swore, stepping aside to reveal the buckets behind him.

Jean-Marc was about to let the man keep the compost, but as he turned to leave he noticed a pile of wood in the camionnette and realized that Mr. Fallen Bits had also helped himself to some firewood (the oldest Grenache vines that had recently died).

"Mind if I have a look in your truck?" Jean-Marc asked. That is when he discovered six bucketfuls of "fallen bits"! Now that explained the great "dent" on his compost pile.

"Monsieur," he began. "If you need compost, I can give you the telephone number of the company that sold it to me because, you know, compost--CE N'EST PAS DONNE!!!"

*     *     *
Apparently compost isn't "dirt cheap" ("donné") -- but who knew it was a commodity? Back to the kitchen now... where I intend to turn those wilted lettuce leaves and a few pumpkin skins, eggshells, coffee grounds and, you know -- "les restes"-- into liquid gold. Never mind physics. This is economics!

One hundred more French words and stories in my book Words in a French Life.

The Grape Grower: A Guide to Organic Viticulture
The French Peasantry in the Seventeenth Century